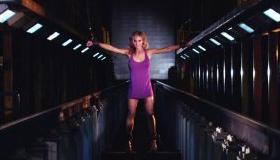 All the formula splatter and elaborate death traps inspired by its franchise serial killer Jigsaw (Tobin Bell) are back for Saw 3D, but lackluster 3D effects will dampen the trick-or-treat holiday enthusiasm from its male fan base. An opening trap involving a lovers' triangle, a glass booth on a public square and buzz saws also fails to deliver on the promise of splatter flying off the screen. Midway into director Kevin Greutert's second go-around as a Saw director, it's evident that the downward earnings trend will continue for the six-year horror franchise from Lionsgate and Twisted Pictures due to its feeling of redundancy. Yet, in a storytelling trademark that goes back to the original Saw in 2004, writers Patrick Melton and Marcus Dunstan save the best surprise for the film's final minutes. With longtime Saw fans facing the choice of Paranormal Activity 2 this weekend and poor word of mouth among the horror fan base likely, the future of the Saw franchise is uncertain. Still, the sinister arrival of one of the original Saw victims, Dr. Gordon (Cary Elwes), brings a welcome burst of energy to the story. Watching Elwes' creepy performance is almost enough to wish for one last stab at the Saw franchise. Almost.

The best seat squirming splatter occurs midway into Saw 3D when a punk racist has been glued to the front seat of a revving car and has to rip off his skin in order to keep the muscle car from killing his trapped friends. Well-paced by Greutert with quick bursts of gore as the punk slowly rips his skin, the scene is not only the highlight of the film but also an example of the type of cover-your-eyes horror that Saw helped create.

Unfortunately, most of the traps involve a Jigsaw survivor named Bobby Dagen (Sean Patrick Flanery) who's victimized after the publication of his best-selling book about outwitting the crazed serial killer.

Longtime fans understand that watching the latest Saw movie requires knowledge of Saw history since the latest edition always picks up from the last film. The police continue to investigate who's behind the latest Jigsaw murders since the original Jigsaw (Tobin Bell) is presumed dead. Detective Hoffman (Costas Mandylor) survives a metal trap chained to his jaw and head by Jigsaw's widow Jill (Betsy Russell). Injured but free, he tries to get his revenge on Jill. Meanwhile, Bobby faces his own fight for survival from various traps in an abandoned factory.

Most of the deadly mousetraps dreamt up by writers Melton and Dunstan (Saw IV and V) are less ingenious this time. Greutert, who's directing his second Saw film after a long career as an editor, fails to bring the drab industrial setting to life despite his use of a cutting edge SI-3D digital camera system.

Still, the success of the Saw franchise rests on its Grand Guignol-inspired traps and Saw 3D comes up short on the much-needed bloodletting.

Horror franchises such as Halloween and Nightmare on Elm Street come and go as audiences discover new ones to support like Paranormal Activity. Still, the Saw profile continues to grow internationally and the popularity of 3D will distinguish it from Paranormal as it plays wide on 2,100 3D screens and 2,808 total screens.

Saw 3D will fail to match $60 million take of the previous 3D genre release Resident Evil: Afterlife, but the added revenue from 3D tickets sales and a weekend debut without any competing wide releases will help it exceed the Saw VI tale of $27.9 million.

That's probably enough for the franchise to continue and perhaps experience a true re-boot that goes beyond the addition of 3D effects.