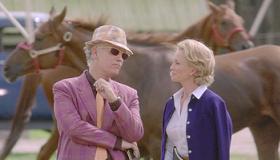 It may not break any new ground in the well-worn, horse racing movie genre, but this thrilling and inspiring entertainment about the legendary, 1973 Triple Crown winning horse should have audiences standing up and cheering. Obvious comparisons to Universal's multi-Oscar nominated money maker Seabiscuit aside, this magnificent tale of a true thoroughbred champion was, according to its producer, made for a third of the price of that 2003 sleeper, and actually tops it for pure emotion and strong production values. This makes Secretariat a good bet for box office success from the same ticket buyers who not only embraced Seabiscuit but also loved last year's surprise, sports-oriented hit, that little, unheralded $250 million grossing movie that won Sandra Bullock an Oscar. In terms of feel-good, old-fashioned, crowd-pleasing filmmaking, Secretariat IS this year's Blind Side. Disney ought to hit the exacta with this one.

Director Randall Wallace (We Were Soldiers) and screenwriter Mike Rich (working from the book, Secretariat: Making Of A Champion) have indeed taken a page from The Blind Side formula book. These filmmakers have managed to make what on the surface would seem a predictable story about a well-known legend into a nail-biter about an uninitiated horse owner who bets it all on a colt that stood up the moment he was born. Smartly centering their story on the horse's owner, Penny Chenery (Diane Lane), and her partnership with down-on-his-luck trainer Lucien Laurin (John Malkovich), the filmmakers show us how Chenery risked all on the offspring of another great racer because she believed the horse could grab the Triple Crown. Should she fail on this long shot (no horse had done it in 25 years) her father's entire business would come crumbling down. Complicating matters for this mother of four and devoted wife are her brother (Dylan Baker) and husband (Dylan Walsh), who are convinced she is going down the wrong path and want to sell the horse to pay off estate debts. Although the outcome made sports history, the film remarkably manages to build mounting suspense right up to that incredible final stretch run at Belmont when Secretariat took off like the wind and won by 31 lengths.

Particularly impressive is veteran cinematographer Dean Semler's inventive cinematography that manages to put the audience right in the middle of the races like never before. Pulsating sound design by Benjamin L. Cook emphasizes the heavy breathing and the thunder of hoofs on the track. Beyond the technical innovations, Wallace stays true to biopic convention in the storytelling, turning out a solid family film that should please everyone, if not hardcore critics who may wince at the traditional trail the film takes.

As Penny Chenery, Lane is just wonderful, particularly in one-on-one scenes with the horse she calls Red and in detailing the dogged determination of a woman thrust into a male-dominated world, succeeding though her family said she wouldn't. Malkovich is terrific, stealing every scene he's in as the colorful trainer. Entourage's Kevin Connolly is sharp as a reporter. Adding warmth is Margo Martindale as Chenery's close friend and confidante, and Nelsan Ellis as the ever-optimistic stable worker who grows close with Secretariat. Otto Thorwarth plays legendary jockey Ron Turcotte close to the vest and rides in style. Veterans James Cromwell and Fred Dalton Thompson also have nice moments. Casting of the horses is flawless.

In Secretariat Disney has a fine fall entry, a truly exciting and beautifully made movie that makes a run for the heart.