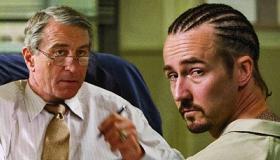 Stone is highly charged and vibrant, and pits Edward Norton against Robert De Niro for two utterly electrifying performances. There is enough star power here alone to attract huge audiences. Stone is best seen on the big screen, not only because one can fully feel the force of these performances but also to lessen the impact of the film's dissipating force as the cluttered script eventually forces its power into insignificance. By the time all the loose ends need to be tied up, director John Curran has relied too much on his stars to save the film from ending with more than a whimper.

De Niro plays Jack Mabry, a typically frosty veteran parole officer with only enough social grace to please his boss. Even though he loves his wife and daughter he's merely monosyllabic at best and disturbingly brusque otherwise. It's not so much that an emotional fortress surrounds him as a vast canyon. The one hint to his inner life is an episode from the past that is at once off-putting, poignant and befuddling. De Niro is unflinching, at once staunch and imposing.

Gerald "Stone" Cresson (Norton) is a convicted arsonist with an opportunity for early parole. His character matches Mabry for impenetrability, even though he continually runs off at the mouth. Stone's delusional rants often provoke the officer, like a small, yappy dog who delights in making the bigger one snap in protest. It's questionable whether Stone possesses a modicum of restraint; he spins truth lies, pathetic pleas and questionable motives into a web that entraps him and sucks in Mabry. The inner workings of this deranged but fascinating and charming criminal eventually taint our perceptions about everything and everyone around him. He's even sympathetic at times. This is not a simple study of a delusional mind.

Both veterans bring equal parts verve and intensity, as well as dark and shady subtlety to their performances. De Niro is the master of such roles, having established himself both as a sociopath and a hardened authority figure in other films, and his presence here stresses the fine line between both. Norton gives as well as he gets and then some. You can almost see the bemused grin on De Niro's face as he contends with a perverse mirror image of his past as a performer. He, like the rest of us, is duly impressed.

With these hard-bitten men going toe to toe until the bitter end, Stone is equal parts freakish dance and genuine boxing match. But the film loses much of its impact once the peripheral characters take over. Milla Jovovich is perfectly perplexing as Stone's wife, who gets involved in his macabre scheme to break down Mabry's tough exterior and secure himself a release. At the same time, Stone discovers religion and the film becomes a meditation on spiritual matters while it's also a portrait of decline. With two characters already staring down the precipice, these larger questions just clog up the engine.