close
The Lisbeth Salander trilogy comes to a close with another dull, talky chapter bound for commercial glory

The Girl Who Kicked the Hornet's Nest 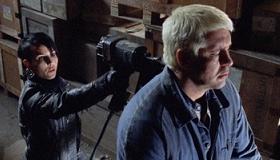 The incredibly popular franchise constructed by the late Stieg Larsson takes another minor eternity to play itself out in The Girl Who Kicked The Hornet's Nest, which continues its predecessors low standards without all the previously involved technology. Whereas the first two films alternated between painful violence and long, loving close-ups of computer screens processing all manner of less-than-fascinating information, Hornet's Nest sees girl hero Lisbeth Salander largely deprived of technology, leading to many lackluster dialogue exchanges about information already largely known to the audience. Despite the general lack of excitement, audiences - addicted as they are to the original books - will probably make this another arthouse hit, as they did the previous, equally bad installments.

Taking off exactly where The Girl Who Played With Fire left off, Hornet's opens with battered, bruised Salander (Noomi Rapace) being ferried to a hospital after she was nearly killed by her father. As criminal investigations swirl around her head, journalist Mikael Blomkvist (Michael Nyqvist) - still pining for Lisbeth and firmly convinced of her evidence - continues investigating how Lisbeth came to be so messed up and who did this to her. The evidence, unsurprisingly, points towards a rogue cell within the government. No matter the threats against him, Mikael and his plucky journalists straggle on. All comes to head in the least fascinating courtroom trial in recent memory.

Fans will presumably get what they came for; what anyone else gets out of it is hard to say. As ever, the series is indifferently staged and edited. Most scenes consist of people exchanging information that may or may not be known to the audience; in either case, dramatic irony or suspense never enters the equation. You can see why David Fincher - a master at this kind of thing, as shown in Zodiac and The Social Network - would be drawn to the material for the inevitable planned American remakes; director Daniel Alfredson, however, isn't up to much. Villains range from elderly Swedish men who listen to string quartets as they burn vital papers to one guy (Micke Spreitz) who resembles "Jaws" from Moonraker.

Despite the original series' title, Men Who Hate Women, the series' insistence on playing footage of Salander being raped in each and every film is disquieting. Here, though, even the repugnant violence of the first two films is gone, in favor of a wrapping-up-loose-ends approach that leads to a supremely underwhelming conspiracy; suffice it to say the blame-the-Soviets approach is way less fleshed out here than this summer's Salt. As a whole, the trilogy's mix of total silliness (Neo-Nazis! Giants who feel no pain!) and its utter lack of glee in said silliness remains a benchmark in dourness and dullness. No more please, even if Larsson's estate allows his unfinished fourth book out into public light.