close
What begins in contrivance goes in unexpected directions

Welcome to the Rileys 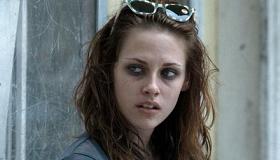 James Gandolfini plays a grieving father who strikes up a cathartic friendship with a teenage prostitute in Jake Scott's delicately balanced exploration of lost souls, Welcome to the Rileys. Not an immediate crowd-puller but it should benefit from positive word of mouth as well as the marquee power of its leads.

While at a business convention in New Orleans, Doug Riley (Gandolfini) encounters Mallory (Kristen Stewart), a young woman working in a strip club. As Doug lost his only daughter in a tragic accident eight years ago, he sees in Mallory an opportunity to regain his role as parent and tries to become a kind of surrogate father to her. Once Doug settles in with her in a slum apartment, a bizarre and platonic relationship develops. When his wife quickly assumes the role of mother for Mallory, it becomes clear that this is no conventional look at affair between an older man and a young woman.

The film wears its heart on its sleeve, but the drama falters when the tone grows over-earnest; additionally, Scott's direction fails to exert a tight grasp on his material. Scott, who has directed commercials and music videos, but only one previous feature (Plunkett & Macleane in 1999), adopts a leisurely pace that works, up to a point. Stewart as the foul-mouthed Mallory takes the chance to expand her acting credentials.

Our credulity, however, is strained when Doug's wife, Lois (Melissa Leo), decides to end her self-imposed isolation in their home, turning up at the hotel and eventually meeting Mallory. At this point they both try to mount a well-meaning rescue mission to "save" Mallory from herself - no easy task in the circumstances.

The film has its moments, with much pleasure to be had from the pairing of Gandolfini and Stewart. As a showcase for their talents it works even if the overall impression is less than the sum of its parts.