close
Like Christmas but with more glitter and fewer kids 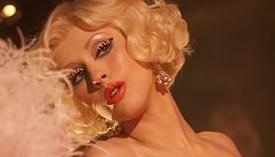 It seems as if musicals are allowed good acting or good song-and-dance numbers, but not both. Last year's Oscar bait embarrassment Nine, for example, featured horrid songs performed by talented actors, whereas Burlesque, Christina Aguilera's big screen debut, is burdened by daytime-television caliber performances despite its stunning, high-energy musical numbers. Aguilera plays a tenacious waitress who achieves stardom with the help of tough-as-nails (but maternally so) artistic director, Tess (Cher). The plot that follows, like burlesque itself, is predictable and blatant, but unlike the titular dance it's surprisingly not teasing. Audience response for this should be very enthusiastic, with a highly marketable soundtrack and great musical performances by its stars. Box office, like ancillaries, are spotlight-bright.

Armed with relentlessness and beat-up power heels, Ally (Aguilera) searches for dance jobs in L.A. until she finds The Burlesque Lounge. A subterranean throwback, The Burlesque doesn't show the Burly-Q in the brassy, slow-stripping tradition of note; it's really more of a cabaret (and this film takes most of its cues from that 1972 Oscar winner). Ally forces her way into an audition and nags until she gets a spot on the dance line. When the evil prima donna of the club (a brunette Kristen Bell) sabotages her number, Ally steps up and stuns the crowd with her voice. The film improbably banks on the magic of this revelation, but the sequence in question is so electric that the you-didn't-tell-us-you-could-sing cliché hardly matters. During the musical numbers, Aguilera and Cher are equally captivating, and viewers who don't care for either of them will be appeased by the alluring display of heels, lingerie, and the kind of makeup one associates with jubilantly performed femininity.

Eric Dane is on hand as a charismatic and predatory real estate developer who bullies Tess into selling the club; he sates this interest in The Burlesqe by conquering the lead dancers one at a time. As a classic foil, this guy deals in monetized abstractions like "air rights" while our protagonists are capable of converting dreams into something tangible and meaningful. The film is preoccupied with authenticity and rightly so: performances such as singing, dancing and gender itself cannot be cathartic if insincere. Moments that could veer toward irony instead embrace sincerity. Cher, who famously launched multiple retirement tours, performs a song called "Last of Me" (as in "you haven't see the..."), but the filmmakers don't want to be in on that joke. This rags-to-sequins tale may be schmaltzy in its sincerity, but ‘tis the season. Glitter is optional, but certainly encouraged.