close
Butch Cassidy and the Sundance Kid with lounge music.

on November 08, 2010 by Barbara Goslawski
Print 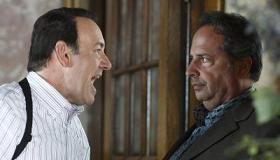 Casino Jack is a refreshing take on the political crime drama. Part thriller, part comedy and very much a biopic, this complex film chronicles the rise and fall of Jack Abramoff, the most powerful lobbyist in Washington during the latter part of the previous century. Director George Hickenlooper displays a level of flamboyance second only to Abramoff's, as the director reveals the lobbyist's delusions and manipulations, providing insight into how this seasoned artisan (or charlatan?) spun his aspirations past some of the most powerful figures in recent history. Kevin Spacey's virtuoso performance is pitch perfect in this elaborate rondo: with him at the center of this tour de force, it'll draw a healthy and diverse crowd.

Kevin Spacey is a powerhouse as the eponymous Casino Jack, the high class hustler who managed to convince his victims that he was actually saving them as he stole everything out from underneath them. Shameless political wheeling and dealing and an attempt to defraud both the Feds and the Native peoples of America were the seemingly incompatible meeting points in his bizarre plan to establish a casino empire. But in Jack's world everything made sense - even a Hebrew day school funded by illegal proceeds.

Not even US presidents escape unscathed. Jack Abramoff was the most powerful lobbyist of his time, with a bevy of political bigwigs in the palm of his hand. Hickenlooper's strategy of letting his leading man drive the narrative is brilliant and adds to the film's charm. He lets Spacey take over the way Jack would, steamrolling everything and everyone in pursuit of his dreams. Hickenlooper sets the right tone and the perfect pitch with roaming cameras and sweeping crane shots - everything is on as grand a scale as Abramoff would have himself demanded.

The character that remains Jack Abramoff, in all his flaky, power-hungry madness, defies logic. Spacey presents the man as brash, off-putting but also sympathetic. Jon Lovitz as Adam Kidan is the perfect foil for Spacey, bursting at the seams with raw, untamed ambition but not so much as a touch of class; he remains delightfully unapologetic. The distasteful Kidan actually makes Abramoff more palatable. In a classic scene, he shows up at Jack's mansion, guzzling an open beer from the six pack he's carrying.

Casino Jack is partly a morality story, but it's also a modern fairy tale that plays like a disturbing prescription for the good life: go after it in whichever way you can. It's a hyper-real, fantasy and when we see Abramoff's thoughts and actions unfold at manic speeds it's reasonable to assume that he's so successful because he can feel some fundamental rhythm—the rate of the American dream. Jack's high on the power he's building and, like an addict, just keeps going after more. Abramoff had the time of his life ripping us off, and like every modern anti-hero we (can you believe it?) cheer him on.