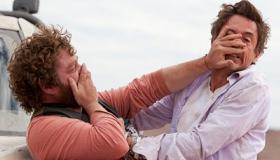 Beware comedy trailers. As everybody knows they tend to splice together the funniest parts and leave out the comparative dross. In Due Date's case, what's featured in the promos is sufficient to make it consistently amusing without producing any sublimely hilarious, roll-on-the-floor bits a la Borat or The Hangover, both of which Todd Phillips can take some credit for. The teasers don't reveal the movie's harsher, somber undertone - the quality that makes it play like the Observe and Report of odd couple road comedies. Thanks to unrelenting marketing and tantalizing casting, Due Date should enjoy a big opening frame, with business declining significantly once punters learn it's not exactly a feel-good lark.

Mind you, the degree of false advertising isn't egregious and nothing is overtly repellant or alienating, but as in much contemporary comedy, the audience's discomfort is high on the filmmaker's agenda. It won't matter initially, since Robert Downey Jr. has developed a reputation among moviegoers as a star that can do no wrong. Zach Galifianakis gets his pass by virtue of his appeal as the flavor du jour. And, with Phillips' wildly successful The Hangover fresh in their minds, few will begrudge the writer-director's attempt to plumb the subgenre's more serious, borderline twisted depths while also inciting laughter.

The same can't be said for the movie's references to the CBS sitcom Two and a Half Men. That highly-rated Charlie Sheen vehicle is an obsession of Galifianakis' character Ethan Tremblay who, for all intents and purposes, operates with half a brain. Ethan crosses paths with Downey's Peter Highman at the Atlanta airport. Peter, an architect, is rushing home to L.A. where his wife (Michele Monaghan) is about to give birth to their first child. Aspiring actor Ethan is also bound for Tinseltown. Their collision effected, the four credited scenarists throw the pair into a rental car along with Ethan's pug, Sonny, and step on the gas for a surprisingly angst-ridden cross-country jaunt.

With its premise so easily established, Due Date is able to be modestly raucous as well as character-driven, which is how it goes astray since it tries to evoke complex moods and feelings that are beyond its ken. For one thing, Ethan is over-drawn and Peter is under-drawn, so the two figures don't mesh or clash as well as they need to. Mincing naïf Ethan is loopy to begin with and his pot-smoking habit doesn't help matters. He's a fabulist, a fop and a fool - unnervingly needy and dull-witted but possessed of a solid-gold heart that's supposed to counteract his more pathetic qualities. Peter, the exasperated straight man, has one defining character trait - a bad temper - and it's enough of a flaw to have him put through the ringer physically and to a lesser extent emotionally, if not sufficient to win us over or make the movie a rousing success. Downey is capable of doing more than delivering a string of imprecations. He had more bona fide jokes as Sherlock Holmes; here, his kinky, bad-boy side feels stymied. Without more qualities to fill in the blanks of his persona, it's hard to believe Peter wouldn't follow through on one of his violent threats and harm the monumentally stupid Ethan.

Rather than inserting this or any other plot variation, Due Date scratches the underbelly of romps featuring mismatched strangers traveling on that inevitable path toward friendship. In addition to the one-liners and physical mishaps entailing much blood and tears, many chases and stunts and an undercooked Mexican foray, there are serious interludes linked to Ethan's mourning of his father and his need for a replacement figure. He's seeking a friend, a father, or a lover: ideally, some combination of all three. Romantic undercurrents are discernible in this love-hate relationship, mostly because Ethan's sexual orientation is left up in the air. (He's not asexual judging by his propensity to masturbate every night before falling asleep.) He's a roly-poly stalker, albeit with a sweet side, who ought to be resisted. Pitying him would be the biggest mistake of all.

Some, maybe those who consider Observe and Report to be a trenchant satire, will find it gratifying that Due Date has an edge and isn't too gooey or squishy. Yet it flinches from the outrageously raunchy or grotesque - unless a shot of canine genitalia is beyond the pale - and so abides by the formula. In other words, it's a mainstream comedy. It has just enough humor but insufficient pathos. You wish it would really try to offend and disturb rather than succumb to the feel-good demands of the breezy format. Although it reaches for something deeper and darker, it stays on the level of a sitcom such as Two and a Half Men, garnished with appealing actors, a good soundtrack and a few cool shots of the highway.

Not quite the yuk-fest one was hoping for or as perversely alienating as Observe and Report, Due Date shares the schizophrenic quality, though not the numbing length, of another Seth Rogen movie, Funny People. As Peter corrects his wife at the end of his Ethan ordeal, ‘there's a difference between loving a person and surviving them.' Same goes for certain movies.