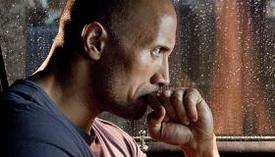 Dwayne "The Rock" Johnson is denim-clad and muscle-bound in the '70s-inspired revenge thriller Faster, just the third release from fledgling distributor CBS Films. After taking a break from action with family movies (Tooth Fairy, Return to Witch Mountain) and supporting roles in comedies (Get Smart, The Other Guys), Johnson returns as a working-class anti-hero and former getaway man simply named Driver, a role that fits his persona hand-in-glove. With its hardcore violence and profanity, Faster is Thanksgiving counter-programming at its best. (Other releases this week include Disney's Tangled and Burlesque starring Cher.) Unfortunately Johnson's action man return is not worthy of his battleship physique. Sibling screenwriters Tony and Joe Gayton unload bad dialogue and hokey melodrama whenever the guns aren't blasting and Driver isn't peeling rubber in his classic muscle car, a Chevrolet Chevelle. Director George Tillman Jr., taking a break from comedies like his Barbershop films and Soul Food, recreates the B movie grit reminiscent of a Charles Bronson thriller but fails to get the pulpy balance right. Faster is disappointing because Johnson is tailor-made to be the next strong, silent warrior in the tradition of Clint Eastwood, Yul Brynner and Kurt Russell. Die-hard action buffs will seek out Faster but poor reviews will dampen its chance at strong crossover business and keep it in the category of a "Rock" underperformer like Walking Tall ($46M) or The Rundown ($47M).

Just released from prison, Driver (Johnson) hits the road with an old photo of himself and his brother taped to the sun visor and a packet containing the names and addresses of the crooks responsible for sabotaging a bank robbery, getting him tossed into prison and killing his brother in front of his eyes. Standing in his way are a pair of cops (Billy Bob Thornton and Carla Gugino) and a hired hit man (Oliver Jackson-Cohen) sent to stop Driver before he kills everyone on his bucket list.

Carla Gugino is plenty tough and completely comfortable as Cicero, a detective intent on catching Driver. She's a B movie natural. Billy Bob Thornton puts his shaggy dog personality to good use as a veteran cop just days from retirement. Johnson, who alternates between expressions of anger and aggravation, plays the vengeful brother well and when he and his gun enter the room the movie crackles with tension. Surprisingly the unexpected spark of the movie goes to British actor Oliver Jackson-Cohen as the obsessive, somewhat effeminate, hired gun sent to stop Driver in his tracks.

Tillman Jr. maintains gunfire throughout the film, while the prevailing aesthetic is as gritty and bare bones as a Roger Corman production. Faster's crippling flaw is that the director and screenwriters failed to make better use of Jackson-Cohen.

Watching Driver peel rubber proves B grade action movies are a welcome diversion in the era of CGI blockbusters. If only Faster didn't fizzle each time Johnson put down his gun.