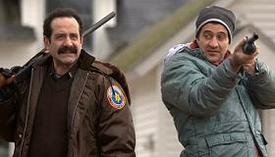 Venice, California meets Wisconsin in Feed the Fish, a genuine new comedy with its heart in the right place. Multi-hyphenate Michael Mattzdorf has crafted a love letter to his home state—yes, there's more to Wisconsin than cheese—in the form of a basic fish-out-of-water romance. Like any true small film, Feed the Fish will have to scrape and crawl to find its audience, but moviegoers who give it a chance will be rewarded in a handful of ways.

Joe Peterson (Ross Partridge) found literary success with Mr. Kitty Feeds the Fish, an unconventional children's novel. With that came the standard stuff: a great apartment, a hefty advance and a gorgeous blonde girlfriend. Only now Joe has writer's block and he needs a change of scenery in order to jog something loose. Enter his friend JP (Michael Chernus), who suggests they fly to Wisconsin for the annual Polar Bear Plunge, an event that entices the truly daring to jump into freezing water on Christmas Day. Yet when an unfortunate encounter with a raccoon (hint: it threatens his very manlihood) takes JP off the grid, Joe is forced to fend for himself. He meets a cute waitress named Sif (a glowing Kathryn Aselton) and the two instantly take a liking to each other. The only problem is that Sif's father (Tony Shalhoub) is the town's sheriff and he doesn't take kindly to an outsider making eyes at his daughter. Sparks fly. Mayhem ensues. Cultures clash.

There's nothing groundbreaking at all about Mattzdorf's script: you see where it's going from miles out. As is the case with any romantic comedy, genre trappings are fine as long as they're believable. Luckily, Feed the Fish has authenticity to spare. The Wisconsin residents feel, well, like real residents, not implanted Hollywood extras. The entire affair is shot at real locations with exactly the right combination of small-town charm and inevitable dilapidation.

Patridge and Aselton have genuine chemistry, but Shaloub—no surprise here—walks away with the movie. Watch out for a scene in which his sheriff holds Peterson at gunpoint and tells him that he'll be around at 7 a.m. sharp to bond. And how do they bond? By firing off shotguns. Don't be fooled though. This is no caricature. Shalhoub injects real heart into a role that could easily have been two dimensional.

Production values are a bit rough around the edges at times, but not overly distracting. A soundtrack by T.D. Lind is definitely a standout.