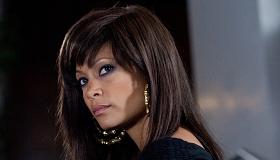 Tyler Perry makes melodramas. That's not a bad thing--ask D.W. Griffith, Douglas Sirk or even Charles Dickens. But emotional manipulation's gone out of style. (Except in Washington, of course.) Written as an Obie-award winning tone poem in 1975 by Ntozake Shange, née Paulette Williams, a well-off, well-educated feminist who adopted her Zulu name after a tough divorce, For Colored Girls is defiantly retro right down to its name. (The actresses seem to pause a beat each time they say "colored.") That this florid weepie has made it to the screen at all - especially after Oprah cluck-clucked her disapproval - is a triumph of Perry's will and his trust that there's an audience out there for deeply felt tragedies about girls they might have known back on the block. Last fall, that audience spent $47.5 million in support of Precious: Based on the Novel "Push" by Sapphire, and Girls' high profile cast means Perry can bank on at least making his money back.

On the stage, For Colored Girls is a seven-woman ensemble reciting 20 poems about the toughest moments of being black and female. Here, their stories are compressed into a city block crowned by a five-story Harlem walk-up where man-eating bartender Thandie Newton, battered wife Kimberly Elise and snoop Phylicia Rashad live in three apartments on the top floor and try to keep everybody - including each other - out of their business. On the bottom floor, Newton's teenage sister, Tessa Thompson, tries to slip loose of mom Whoopi Goldberg's religious zealotry. Meanwhile, social worker Kerry Washington and floundering feminist advocate Loretta Devine pop by on their own passionately personal crusades while outside the brick walls, dance teacher Anika Noni Rose and fashion editor Janet Jackson are brutally schooled that you can't trust a man.

In fact, in this neighborhood, you can't trust anyone. Like Precious, this is a collage of terrible true things: rape, molestation, shame, abuse, addiction, promiscuity, abortion, murder, self-hate, cheating and AIDS, all pressed together so tightly as to block out the light. The enemies are men, even if you have to go back a generation to the original attack. Perry's approach is to slap them all flat on the screen as if daring you to look away (or roll your eyes). There's no depth or surprise in the assaults; their strength is merely that 35 years ago, Ntozake Shange demanded you know they exist - truths that have lost their power since Oprah, Tyra, Maury and Dr. Phil served up pain as TV's daily diet. (And Perry's adopted Precious' editing flourish of cutting to boiling food as a woman gets raped.)

At least we're shepherded through this hood of horrors by a stable of great actresses. There's not a weak link in the ensemble, though the face you take home with you is Kimberly Elise's, who brings a raw, shattered nobility to her role as a wife and mother trying to make the best decision from her bad options. Miss Jackson is frosty, Thandie is screamingly beautiful ("I am the wrath of woman!" she howls), and while Whoopi is unshakably Whoopi, she manages enough menace to pull off the job. But the heartbreaker is soulful comedienne and stage actress Loretta Devine, a strong-shouldered single gal with a voice that aches with vulnerability. These are women of might playing women brought low. And while these two hours of hopelessness seem to argue that being an inner city black woman is the unluckiest roll of the dice, these ladies - even at their weakest - carry themselves with the confidence of winners, and we cling to their strength like a life raft.