close
DreamWorks Animation hits another one out of the park 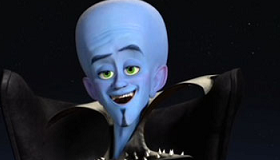 Although there are similarities to Universal's summer animated hit, Despicable Me, the new Holiday ‘toon from Dreamworks Animation has enough off-the-wall humor and smarts in its own right to simply soar as a hilarious comedy event, a Mega-funny movie loaded with laughs, action and heart. Will Farrell and Tina Fey do superlative voice work in this story of a bumbling villain who finds his inner-hero when Metro City is challenged by forces outside of his control. Following on the heels of a very successful year with How To Train Your Dragon and Shrek Forever After, Dreamworks makes it three hits in a row with this sure-fire crowd pleaser that ought to clean up at the family box office and live on well after that in DVD and other ancillaries for years to come.

With a nod to Superman's Metropolis, Metro City is a thriving city center protected by the ever-powerful and efficient Metro Man (Brad Pitt) who keeps the municipality safe from its resident villain, the evil but hopelessly inept Megamind (Farrell). The latter is often taken to launching shoddily conceived plans, like ritually kidnapping attractive TV news reporter Roxanne Ritchi (Fey). When one of those schemes accidentally works Megamind destroys Metro Man and has his years of prayers for total domination answered. (Be careful what you wish for!) Our super-villain soon discovers life ain't so sweet without a main nemesis to share it with, so he decides to turn Roxanne's nerdy cameraman, Hal (Jonah Hill), into the next big hero, a transformed powerhouse named Tighten. Quickly this act careens out of control and Tighten decides to make up for a lifetime of abuse by using his new abilities for revenge, thus undermining Megamind's plans for "balance." Meanwhile Metro Man is found alive but in no shape to resume his normal duties, so Megamind, with help of his longtime friend, Minion (David Cross), must muster whatever good he can to transform himself and save the day.

First with Despicable Me and now with Megamind, there seems to be a mini-trend going on in which the central villain eventually goes for audience empathy and the kind of hero status we usually reserve for the "good guys." This drift resembles an animated equivalent to the anti-hero; what this says about society in question is another issue but it's a refreshing story turn in mainstream family animation and it works wonders here.
Director Tom McGrath, working from Alan J. Schoolcross and Brent Simons' clever script, plays the twist on the superhero premise for all it's worth, emphasizing comedy and character but still providing plenty of fun action sequences in the mix. This is Farrell's show and as Megamind he has found his most appealing screen character since Elf. Without the nuance Farrell delivers the whole soufflé would fall, so it's good he makes the cheeky, not-so-bad bad guy work. It's a positively heroic voiceover performance. Fey is also perfectly cast and plays off Farrell effortlessly as the plucky seen-it-all Roxanne. Hill also gets the humor and goes for it with gusto, as does Cross as the delightful Minion. Pitt, in basically a supporting turn, is preening and perfect as the shallow hero who isn't all he's cracked up to be.

In a family market that's been woefully weak of late, Megamind should not only rescue Metro City but the box office, too.