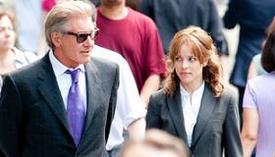 Rachel McAdams stars as a plucky TV producer in an old-fashioned comedy that respects brains, ambition and, as McAdams' anchor dubs, her "repellent moxie." The chipper humor is so classic Hollywood that when McAdams gets excited and balls up her fists, the victims of her cheery speeches ask if she's going to break into song. With a gruff Harrison Ford macho-ing up the screen and a romantic subplot between McAdams and go-to Mr. Perfect Patrick Wilson, Roger Michell (Notting Hill) has directed as good a date movie as you'll find in theaters today, a time when studios are repeatedly racing their heroines to the bottom of the shame index. (Poor Katherine Heigl.) And Morning Glory's good-hearted charm could win it a broader fan base still-—it's a grower, not an opening weekend juggernaut.

Every morning, McAdams wakes up at 1:30 am, the time most young singles in the big city are slipping into bed. Fueled by coffee, she charges down to the IBS studios (an unfortunate—deliberate?—acronym) and corrals her Daybreak team to pin down that day's stories: host Diane Keaton's On-Air pap smear, a psychic parakeet, Mario Batali's lasagna. That's infotainment! And it's pumping through McAdams' veins along with what looks like six cups of joe a day. This is also why her enforced new hire—veteran journalist Harrison Ford, a man who once "laid a cool cloth on the forehead of Mother Teresa during a cholera epidemic"—thinks she's the new plague.

The fine print in Ford's contract says he'll lose $6 million if he refuses to do the network show. Unfortunately, it also says that he can demand a tropical fruit plate in his green room, have final say over TV promos and refuse to do any story he considers demeaning. Which on Daybreak is all of them.

Ford is hilarious and brooding, deeply wrinkled and deeply intimidating. He's got the best lines, courtesy of screenwriter Aline Brosh McKenna (of the repellent 27 Dresses and the much better The Devil Wears Prada) and his relationship arc with McAdams is more important to the script than her makeouts with Wilson, who plays a story producer Ford calls "Sir Dipshit." As his co-anchor, Diane Keaton kills it in her smaller role as the show's longtime host, a former Miss Arizona. Channeling her usual mania into a useful purpose, she's a diva who only breaks out a smile for the camera—she can go from "Screw you!" to "Good morning!" in two seconds.

I'd like to see McAdams get more gorgeous go-getter roles. Heck, I'd like to see all of young, female Hollywood get decent parts, but at least when McAdams puts on a sensible suit, she doesn't look like she's playing dress-up. Her can-do TV exec is smart and capable and, unlike most hapless ingénues, she doesn't walk into walls. (Though she does bang her head on them on purpose.) Comedies about driven career women stick them in teetering Louboutins and make fun of them when they stumble. For a scene or two, even Morning Glory is guilty of that, but by the end, McAdams lopes gloriously through midtown Manhattan on pink needle-heeled stilettos, just one sharp cookie inviting us to run with her as she chases her dreams.