close
Down and down we go 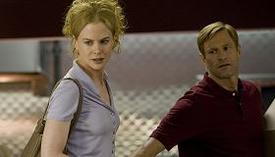 A superlative adaptation of David Lindsay-Abaire's Pulitizer Prize and Tony winning play, Rabbit Hole takes grim subject matter—the sudden death of a young married couple's 4-year-old son—and gives it depth, emotion and surprising layers of humor. With Oscar worthy performances from Nicole Kidman, Aaron Eckhart and Dianne Wiest, this is tough and demanding subject matter, but something that ultimately provides hope. This small gem of a film premiered in Toronto and was immediately picked up by Lionsgate and given a December release to qualify for Oscars. Should it get deserved awards attention the distributor could well see it develop into a specialty hit, especially considering its low budget origins. At any rate, it's an unforgettable, moving and brilliantly acted drama that richly deserves to be seen by anyone who cherishes great filmmaking.

Abaire adapts his own play here and opens the script cinematically without losing the core values that made it work so well on stage. His story wisely doesn't dwell on the actual death of Becca and Howie Corbett's 4 year old son (he was hit by a car) but instead picks up eight months later, when the pair are still grieving and find their marriage has hit a wall as each strives to deal with the tragedy that gripped them so suddenly and won't let go. Trips to grief counseling group are bitterly funny, as Becca and Howie find the recipes offered up by the well meaning but cliché ridden participants ineffectual at freeing them from the emotional cage they're locked into. Neither knows how to escape and the escalating tension builds into fierce arguments, misplaced blame, recriminations and a sense of irretrievable loss, not just of their son but also of the picture-perfect relationship they once had. Becca must also deal with the difficulties of her own family members, including her well-meaning mother Nat (Dianne Wiest) and her rather unpredictable and now suddenly pregnant sister Izzy (Tammy Blanchard). In an effort to find answers that may not be there she reaches out secretly to the teenage boy (Miles Teller) responsible for her son's death. Their private meetings provide some of the most intriguing and heartbreaking scenes in the film. Meanwhile Howie, desperate to feel anything again, strikes up a relationship with another woman (Sandra Oh), causing added complications.

Rabbit Hole, expertly directed by John Cameron Mitchell, is a simple story sparingly told and anyone who has experienced loss of any kind will probably relate. The cast delivers not only some of the year's best performances, but also some of the best work of their careers. Certainly that's true in the case of Kidman who makes a major artistic comeback as Becca, perfectly nailing the sea drift of this once vibrant woman. Kidman has always been a risk-taking actor but her work here exceeds anything she's done before and there's a great possibility she'll be Oscar bound once again. She developed the project as a producer and that appears to have energized her creative juices as well. Eckhart moves away from the kinds of sharp shooters he's played so much to present a touching portrait of a nice guy at his wits' end. Wiest, as usual, is superb, wise and winning. Teller also proves someone to watch as the remorseful teen driver.