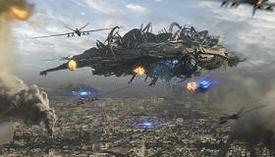 Skyline has its Ed Wood moments, notably when nominal hero Jarrod (Eric Balfour) takes decisive action against one of the alien invaders treating humanity like the main course at an all-you-can-eat buffet. He tries to knock the creature out. It goes as well as can be expected. This sci-fi thriller manages to blend genuine suspense with unintentional laughs. The latest from visual effects whizzes turned feature filmmakers The Brothers Strause (AVPR: Aliens vs. Predator - Requiem) is perfect drive-in fare. Too bad there aren't more drive-ins. Drawing from a base of sci-fi fans as well as lovers of kitschy fun, Skyline ought to post decent numbers, although the scant crowd at an opening midnight screening in San Francisco suggests that the film may struggle in a crowded marketplace.

Bright blue lights raining down from the sky over Los Angeles are the first sign that the human race faces annihilation. The blinding glow wakes Jarrod, his girlfriend Elaine (Scottie Thompson) and their friends as they sleep off a party in the sleek high-rise apartment belonging to Jarrod's best friend Terry (Donald Faison). Curiosity turns into terror when the diabolical nature of the luminescence quickly asserts itself. With the arrival of daybreak, the full extent of the catastrophe becomes clear: Hundreds, if not thousands, of creatures—some looking like jellyfish, others like squid or octopi, while some are monstrous behemoths—hoovering up everyone that comes into their path. "The city's a vacant lot," mutters Oliver (David Zayas), the high-rise's concierge.

There is little that is original about Skyline. The story calls to mind War of the Worlds, Cloverfield, Invasion of the Body Snatchers, and many more movies along the monster/alien invasion line. There is certainly nothing new about grouping characters together and then killing them off one by one. Characterization is another weak point, as it is practically non-existent here. Balfour and Faison have enough charisma to breathe life into their thinly sketched roles, but most of the cast struggles. Dialogue veers between the bluntly obvious and the inane.

All of that would conspire to sink most movies, but that isn't quite the case here. That's partly because just so long as Balfour isn't going mano-a-mano with an incandescent, blobby alien, the creepy, otherworldly creatures are mostly impressive. The Brothers Strause also have their timing down, creating tension and dread even in the most ridiculous of situations. Also for all the defects in first-time screenwriters Joshua Cordes and Liam O'Donnell's script, they did come up with one masterstroke and that is the idea that human beings conspire in their own downfall as they helplessly move toward the light. Funny, no one ever said anything about killer E.T.s on the other end of the light on The Ghost Whisperer.