close
A Disney princess is pretty in 3D 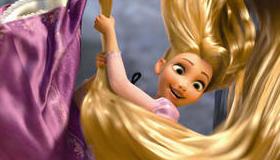 An instant classic, Disney's animated revamp of the Brothers Grimm fairy tale Rapunzel has spawned a spunky heroine who could infiltrate the heavily guarded princess canon. Delightful, funny, sometimes innocuous and more often thrilling, Tangled transforms the old, tower-cloistered damsel story into a morality play that pits openness and sincerity against selfishness and insincerity. (The greatest virtue here is sharing.) Peril is on the menu and the comedy is occasionally rough and often veers into Monty-Python-slapstick, but it's never offensively violent and the characters, including the brilliant sidekicks Maximus, the superhorse and Pascal, the mutely philosophical chameleon, are littered with nuance and charm. Tangled vies for posterity by being its own object lesson in how to watch a movie; icons like glowing lights (e.g. suns icons, stars, lanterns, flowers) and shadow-play cue the kids to learn about symbolism, and in repeat viewings, the visual motifs can train a new generation to read films (fun and instructional!) Box office numbers could be astronomical, reviving brand
trust after recent, lackluster ventures distributed under the Disney banner; ancillaries will be huge. I'm throwing down for my Pascal action figure and Rapunzel bust with plastic hairbrush for Christmas!

When the queen of the kingdom is pregnant, she's struck ill and her citizens scour the lands for a miracle. What they find is a sun lily that embodies both the powers of nature and the warmth of community. Realizing the miracle in their midst, they use it to heal the queen. This flower emboldens the golden-haired daughter of the queen with glowing hair, but a hag called Mother Gothel (Donna King) steals the princess to hoard her hair's beauty-bestowing abilities. Rapunzel (Mandy Moore) grows up confined to Mother Gothel's tower, with the witch posing as her over-protective mother and filling her head with lies that the world below is full of selfish, scheming villains. Mother Gothel insists Rapunzel is too helpless for the great outdoors, which only fuels the girl's not-quite-rebellious urge to leave the tower and find out just why the kingdom floats these star-like points of light into the night each year, on her birthday. Rapunzel dreams of roaming the kingdom but, unlike her sister-in-Disney, Snow White, has no eye towards rescue or princes. When "Flynn Ryder" (Zachary Levi of TV's Chuchem), an orphan turned swashbuckling thief, flies into her tower she smacks him on the head with a frying pan.

Unlike brethren Jafar, Cruella de Vil, or even Dr. Facilier from The Princess and the Frog, Mother Gothel wants to preserve—not destroy—our protagonist. Instead of a clear villain, she's a more insidious beast: codependent, self-obsessed, disingenuous and undermining. (Her snarky passive-aggressive jokes like "Who's that lovely girl in the mirror? Oh, and you're here, too!" are a less melodramatic, but more realistic, take on good and evil.) While not as wild as Maleficent's fire breathing mega-dragon in Sleeping Beauty, Mother Gothel's antics might be just as harrowing and cruel for girls with strained relationships with their moms.

Directorial flourishes play with Rapunzel's status as an princess (though unaware of her origins) who falls for a wanted thief (slumming is an ugly word). Their tandem circumstances are underscored when Flynn hides behind a wall of hair-like vines while men in the shadows plan his fate. And when Rapunzel decides, as all girls decide, to disobey her "mother" to live her dream, she endures a see-saw of emotions: Catholic spasms of guilt ("I'm the worst daughter alive!") and glee (swinging from tree, "This is so much fun!!!"). This is a new, relatable action heroine-and that her brilliantly silent sidekick is named after a French Catholic philosopher isn't accidental.

Ultimately, like the best of Disney's classics, Tangled is made for longevity. However, it's also a ready-made Broadway show, with numbers, dialogue and even drama-club exaggerations all pre-packaged for immediate adaptation to stage. Rapunzel has a life as both a blonde and a brunette, which even bridges the follicular line separating the princesses. She might not be the Great Uniter, but all the little girls can pretend to be her, and maybe this time, that's a good thing.