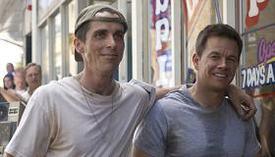 As bantamweight boxer 'Irish' Micky Ward, Mark Walhberg enters the ring to the Whitesnake power ballad "Here I Go Again on my Own," the least apt anthem for a bruiser weighed down by an entourage that includes his manager, trainer, girlfriend, mother, father, brother and seven sisters. His problem is that he can't go anywhere on his own—certainly not across the country from Lowell, MA to Las Vegas for paid training. David O. Russell's family-first dramedy is powered by knockout performances, but doesn't have much message or thrust. A slim film that carries itself like a champion, The Fighter will win praise and dollars that it doesn't quite deserve; in this Oscar season, it's a boxer elevating his stats by taking down weaker competition like The Town.

Lowell, Massachusetts is a factory town and the birthplace of Bette Davis and Jack Kerouac, but by the late '70s, its fortunes had fallen so low that local boy Dickie Eklund (Christian Bale) was christened "The Pride of Lowell" simply for surviving—not winning—ten rounds with Sugar Ray Leonard, even knocking Leonard off his feet (though rumor has it, he tripped). Lowell is also an excuse for Russell to dive into chowdery accents, but at least Boston-raised Wahlberg's is earned. It had better be—Wahlberg fought for five years to get this biopic made, two of them spent buffing up at the gym.

Like Rocky, Wahlberg's Micky Ward wasn't a dynamo. Instead, his strategy was to stand still and take his punches until his opponent got tired, and then knock them out with a blow to the gut. He'd take seven rounds of punishment to deliver one devastating hit, making his wins brutal, boring and improbable. Even in the movie, the announcers are begging him to quit by his bloodied round three. And like Rocky, this is a story about a broke mug who takes his lumps on and off the ring—has there ever been a boxing story starring a middle class guy with options?

The only guy Wahlberg knows who manages to duck trouble is his older brother Dickie (Bale). During his fights, Dickie dodges and weaves like a weasel. Outside the ring, he's the same way, bobbing and swaying when he talks, his eyes goggled and neck loose like an ostrich. Even when he screws up, no one, especially not mom Melissa Leo (great in her hate-able role), stays angry for long. It's fun to see Bale shake off his movie star gloom to play a character that survives because of his charm. Onscreen, he hasn't cracked a smile since Captain Corelli's Mandolin; here, he's a showboating comedian, and footage of the real Dickie Eklund runs over the credits solely to prove that Bale nailed his twitchy charisma. Those tics are part him and part drugs. And the drugs are part of why he's agreed to let an HBO crew follow him around—he's cracked out enough to believe that they're cheering on his boxing comeback, rather than pitying him as one of the stars of the gritty doc High on Crack Street: Lost Lives in Lowell.

His family should know better, but like him they've all bought into the myth that boxing's their ticket to the big time. They're a clan of drunks with dreams. Ward's seven sisters are used for great comic effect. They're not individuals; they're a collective force of nature. (Only a few even get names, that is, if you call Red Dog and Beaver names.) In one scene, they and their mother spill out of a single four-door sedan, bouffants waving in the breeze, like a car of clowns itching for a bar fight.

Their target is Amy Adams, who as Wahlberg's main squeeze is encouraging him to ditch these zeros and get himself a real shot at the big leagues. His hemming and hawing between family and his future is what passes for the plot arc, but we'll find more intrigue watching the mousy-voiced Adams draw her shoulders back and tell her future in-laws to go screw themselves. This movie invites us to leer at Adams' ass, and that, along with her turn as a salty bartender, is continually fun and full of surprises. Still, the movie as a whole is a punching bag stuffed with boxing clichés down to the tracking shots of Wahlberg jogging his way fit. But in its small moments, say when Walhberg sighs that his robe misspells "Micky," The Fighter feels clued-in to the very small, very tough world of a man trying to make his way out of his block—and after getting to know his family, you want to help him pack his bags.