close
Russell Crowe tries to save his wife, but he can't save this undercooked thriller.

The Next Three Days 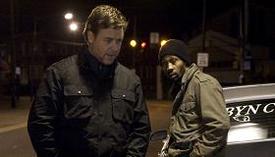 Russell Crowe needs a hit and not the kind that California's Prop 19 would have legalized. He's in a mid-career rut, the acting version of what screenwriters call the second act blues. The tentpole stuff ain't working (see: Robin Hood...actually, don't see Robin Hood) and his stabs at adult dramas (Body of Lies and the unfairly dismissed State of Play) were roundly ignored. In The Next Three Days, Crowe tries to steady his ship as John, a Pittsburgh community college professor who attempts to bust his wife out of jail. The movie was written and directed by Oscar winner Paul Haggis (Crash) and when stripped to its logline, it's pretty ridiculous. Haggis, however, never got that memo. A self-serious filmmaker, he devotes a lot of time to John's scheming and planning, but gets very little audience involvement from the effort, leaving us all-too appreciative of the fairly exciting last act featuring the anything-for-a-thrill antics we thought Haggis was avoiding. Look for some over-35's to sample this adequate entertainment whilst the youngsters feast on Harry Potter and the Pile of Money.

The Next Three Days is a remake of the French thriller Anything for Her from 2008. Both films required their leading men to transform from mild mannered teachers to hyper-focused, heroically reckless, gun-toting heroes. The last time Crowe played a believable everyman to any positive effect was in Michael Mann's 1999 masterpiece, The Insider, for which he gained a reported 45 pounds; at that point his career was just starting to get serious. Eleven years and one Oscar later, he can shrink and expand to fit any character's needs yet, box office potential aside, he's still too masculine to make John work in the fashion Haggis really requires. Crowe's command does come in handy because the friendless John has no one to articulate his thoughts to, so his emotional state must be conveyed through expression and body language. He's a lonely man on a lonely mission as quixotic as the Don Quixote adventures he lectures his students about.

John's wife, Laura (Elizabeth Banks), has been sent to the Big House for the murder of her female boss. Whether she actually committed the crime is saved for the end, creating a moral ambiguity of zero impact. With Laura up the river, their young son Luke (Ty Simpkins) becomes emotionally distant, which increases her sense of suicidal despair. After all legal appeals are exhausted John turns desperate, hatching a plan to spring Laura from the pokey, which he researches by watching YouTube videos and haunting the local library. He also gets an enormous assist from Damon, an ex-con who broke out of prison seven times. In a bizarre little cameo, Damon is played by Liam Neeson, sporting a ridiculous cat burglar outfit and gravelly New Yawk accent. In the span of one scene, Damon conveniently spoon feeds John every lesson in the prison break textbook. Immediately, John goes home and creates a wall-sized mural of Sharpie scribbles, taped photos and giant maps that tell him (and us) how much money he has left to bankroll his efforts and the routes he should take to get out of town (an artsy collage, by the way, that could easily have been discovered by Luke or anyone else who happens through the door). John spends much of the pre-escape festivities skulking and conniving without providing any concrete clue as to what he has in mind, although the plane tickets and fake ID's give us a vague idea. Haggis doesn't show John's cards until Laura is rushed to the hospital and he executes his plan.

As In the Valley of Elah proved, and The Next Three Days further confirms, Haggis is a clever man whose lofty convictions sabotage his films. The Next Three Days, his first purely commercial movie, is an unbelievable story that Haggis almost ruins by trying to make it believable. This material needed less In the Valley of Elah and more Walker, Texas Ranger, one of the television shows on which Haggis cut his teeth as a writer. Crash, his breakout directing gig, was an exasperating liberal-guilt message movie, the pompous plea of a TV writer desperate to be taken seriously. Here, in what should have been a lean, tense genre exercise, we're supposed to wonder if John's falsification of medical records and violent behavior mean he's gone too far in his obsessive drive to reunite his family. The miscalculation is that we never wonder if John's behavior might endanger the very person he's trying to save. We just want the hero to prevail in a ludicrous story that asks only to be excitingly told (although Elizabeth Banks' underwhelming presence makes Laura hardly worth the trouble).

To get anything out of this overlong, underwhelming nonsense, think of it as a blow against the wimpification of the American male. Why shouldn't a Prius-driving college professor man-up and shoot a few drug dealers? When John encounters the neighborhood lowlifes—in scenes designed specifically to provide him with the physical and mental tools he needs to rescue Laura—it's good he gets the tar beaten out of him. It'll put hair on his chest. Let the sight of a pot bellied Russell Crowe going nuclear be an example to all you family men. Sometimes even the best husband and father needs to burn down a meth lab. And now that his teaching career is likely over, maybe John can support his family with a job as a badass Texas Ranger. Maybe Haggis can return to TV to write about it.