The Nutcracker in 3D 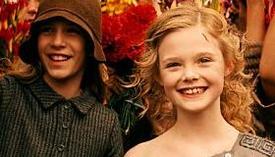 Sigmund Freud is not a character in The Nutcracker in 3D, but this latest film inspired by Tchaikovsky's classic ballet is set in 1920s Vienna and so the pioneering analyst is referred to from time to time. Makes sense, especially since there is something seriously amiss with the movie's young heroine Mary (Elle Fanning) whose vivid imagination doesn't just bring the titular wooden soldier to life but also envisions a society controlled by Nazi-like rats, complete with holocaust. To call this so-called family film dreadful is an understatement. Jaw-droppingly awful on almost every level, this is a movie to avoid. It deserves to bomb, but with its Yuletide theme and lack of Christmas themed competition, it will probably rack up decent numbers despite its considerable flaws.

It is Uncle Albert (as in Einstein, giving Nathan Lane the perfect excuse to overact) who brings Mary and her toy-destroying brother Max (Aaron Michael Drozin) the titular nutcracker on Christmas Eve. The magic starts after lights out when the thing springs to life, to Mary's utter amazement. Now nicknamed NC and voiced by Shirley Henderson, The Nutcracker introduces Mary to the Sugar Plum Fairy (Yuliya Vyotskaya, who also plays Mary's mother) and tells her his tale of woe. He is really a prince, but he was overthrown by the Rat King (John Turturro in blond wig and prosthetics) and turned into a nutcracker. Now the Rat King is forcing "ratification" on the prince's city, aiming to make the entire population rats. Averse to sunlight, he has smoke factories running 24/7, to which he forces all the children surrender their toys. That's right, it's a toy holocaust.

Why director Andrei Konchalovsky and his co-writer Chris Solimine thought this was a good idea is a mystery, but a bigger puzzle is how this script got a green light. If transforming the Holocaust into a tasteless, PG-rated fairy tale wasn't enough to give a producer pause, the wretched dialogue and flat characters should have. The bad times don't stop there. In additional to Eduard Artemiev's original score, the soundtrack boasts eight new Tim Rice songs set to Tchaikovsky's familiar music. Too bad they are eight bad, new, Tim Rice songs, as the acclaimed songwriter perhaps pitched his lyrics to conform to the screenplay. Perhaps to ensure that the viewing experience is as horrifying as possible, the 3D effects (added in post-production) are terrible. A movie that reportedly cost $90 million to make should not be as fuzzy, dark and downright ugly as this.

One thing this Nutcracker boasts is a respectable cast. In addition to Fanning, Lane and Turturro, Frances de la Tour appears as both the children's governess and the Rat Queen, and Richard E. Grant pops up as Mary and Max's father. They have all made themselves less respectable by appearing in this mess. A holiday movie only The Grinch could love, this is a Nutcracker to avoid if one hopes to hold onto their holiday cheer.