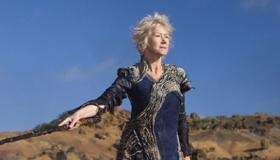 Julie Taymor and Dame Helen Mirren essay Shakespeare's last and arguably most cinematic play, switching the gender of the exiled Duke Prospero (now Prospera) without offering a novel interpretation or conjuring a brave new world on screen. Compact if not cohesive, this is an Age of Aquarius-meets-Mamma Mia! distillation of The Tempest. Making a robust haul unlikely, movie lovers and theater buffs will pass each other in the night, the former more curious about Taymor's upcoming Spider-Man musical on Broadway and the latter darkening the entrance to multiplexes mostly out of loyalty.

Perhaps conscious of a major knock on her prolix adaptation of Titus Andronicus back in 1999, Taymor makes too many concessions to short attention spans, condensing this five-act opus to the point it's difficult to acclimate oneself to the characters or the plot. She's so concerned about moving things along and rendering the action sufficiently cinematic that she never lets the story breath. The result is cacophonous.

Along with rather severe editorial abridgment, the film's hectic rhythm and lack of focus stems from an imbalance between its aural and visual components. The soundtrack frequently overwhelms the verse and eye candy. Too often it's impossible to hear what's being spoken over the din, especially though most understandably during the precipitating shipwreck. Later, when Prospera's wretched slave Caliban (Djimon Hounsou) warns castaways Trinculo (Russell Brand) and Stephano (Alfred Molina) that the "island is full of sounds," he's not exaggerating. You savor the handful of moments when the characters converse without any aural accompaniment.

Not only is the sound mixing off and the movie over-scored by composer Elliot Goldenthal, but the musical offerings themselves are woeful. Music is the food of love according to Twelfth Night's Duke Orsino; here it's an emetic. Hearing frequent blasts of quasi-modernist, heavy-metalish noise, you half expect to see a live band in the wings—long-haired teens dressed all in black pounding on drums and torturing the electric bass and rhythm guitar as if they're accompanying a high-school production of Pippin circa 1976. The ditty that princely Ferdinand (Reeve Carney) sings to Prospera's daughter, Miranda (Felicity Jones), is likewise excruciating. Musicals may be Taymor's specialty, but in Across the Universe she had the good sense to riff on the Beatles catalog. A desert island loop of "Hakuna Matata" would be preferable to this score.

As for the visual effects, they're sometimes cheesy—fruit of a hippy hangover—and occasionally pretty cool. Taymor overindulges in showing Prospera's now-male sprite Ariel (Ben Whishaw) flitting about and taking various animal forms. The sequence representing the wedding masque Prospera gives to the young lovebirds incorporates astrological signs and Da Vinci-esque drawings. The movie's terrific setting offsets any design deficiencies. The volcanic terrain on the Hawaiian island of Lanai, where most of film was shot, provides an ideal natural landscape, even allowing for the distracting and inevitable light fluctuations.

Turning Prospero into a woman and tweaking the language accordingly doesn't make a huge difference to the major motifs of the play: dominion, enslavement, freedom and forgiveness. That can be read as a sign of success, as a tribute to Taymor's dramaturgical prowess and The Bard's flexibility. Still, if you're seeking an ardently feminist interpretation of the text you can't count this Tempest a huge success. The casting primarily colors Prospera's interaction with Ariel (an androgynous creature with alabaster skin and breasts that swell when he's in the act of "dispiriting" Prospera's enemies), turning it into a borderline kinky mother-son relationship. It also gives the master-slave dynamic with Caliban more sexual overtones. But there's no time to expand these ideas.

More tender than imperiously mercurial, Mirren's performance is fine and her supporting cast ably delivers. While she never waivers vocally, there are times when she seems physically dwarfed by her surroundings, hence she's mostly shot from the neck up. Luckily, Prospera has her magic staff and after she gets her swift revenge against those who stole her Duchy and sent her into exile, she gains temporal gravitas courtesy of the black leather, zipper-lined costumes Sandy Powell designed for the Milanese contingent.

Notwithstanding The Tempest's shortcomings and her lack of rivals, Julie Taymor has to be considered a leading expositor of Shakespeare on film. She deserves praise for even trying and let's hope she never stops practicing her craft on screen. It'd be a shame if she abandoned the medium the way Prospera shatters her magic staff before quitting the island and sailing back to Milan.