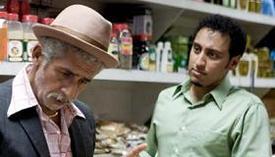 One not-so-dirty little secret within restaurant circles is that specials are typically comprised of remainders from yesterday's lunch service or supplier mistakes rather than the choicest ingredients lovingly selected in the wholesale market that morning. The same can be said about the ethnic comedy Today's Special, which has been jiggled from an age-old entertainment mold. I, for one, love leftovers; many dishes taste better the next day. Alas, it's unlikely a big slice of moviegoers will want to sample this reheated offering, though it has sufficient flavor to perform relatively well in markets with significant South Asian populations or amongst serious foodies who'll flock to anything remotely germane to their passion.

Those with even modestly adventuresome cinematic palates will have their appetites whetted before exiting unsatisfied. In a high-end Manhattan eatery, sous chef Samir (the likeable Aasif Mandvi, who co-wrote the screenplay and is one of Jon Stewart's correspondents on The Daily Show) toils under a celebrity chef (Dean Winter), efficiently running his kitchen while the boss gets all the notoriety. Passed over for a promotion to head chef at a new sister restaurant, Samir quits. He's primed to land an unpaid apprenticeship in Paris, but after visiting his childhood home in Queens, events dictate a different course.

In that melting-pot borough we meet Samir's parents, who still haven't gotten over the death of Samir's brother. Dad Hakim (Harish Patel), disappointed with Samir's career path and frustrated by his inability to communicate with is son, owns a struggling restaurant, Tandoori Palace. Mom Farrida (Madhur Jaffrey) forever pesters her thirtysomething boy to settle down and marry a nice Indian girl; she constantly sends him profile printouts from Internet dating sites, garnished with her cheerfully prodding post-it notes.

When an eminently foreseeable medical emergency besets his portly, stressed-out father, Samir is forced to stick around and manage the bankrupt, generic establishment. Through a couple of fortuitous encounters, he's able to enlist the talents of a wise cabbie named Akbar (Naseeruddin Shah) and his fetching, blond-and-blue-eyed former colleague Carrie (Jess Weixler). With Akbar concocting delectable dishes and dispensing sage advice aimed at getting Samir to chill out and fulfill his own potential, the restaurant is revived and romance simmers. A dim-witted dishwasher and doltish waiter, along with Tandoori Palace's elderly hangers-on, pitch in as well.

Director David Kaplan is something of an expert at ethnic comedies, having helmed 2007's less conventional, often bizarrely supernatural feature Year of the Fish set in New York City's Chinatown. The middle of this picture flags—the jaunty music score notwithstanding—and the appealing acting troupe deserves better. The scenario proffered by writers Jonathan Bines and Mandvi, based on the actor's personal experiences, cries out for more originality and spice. And yet you can appreciate that it's not grossly crass or exploitative.

Familiar though the material may be, Today's Special does sidestep (albeit without much room to spare) some of the more hackneyed Indian stereotypes and cultural assimilation clichés. Another sign that a sincere attempt is being made to tweak the recipe, if ever so slightly: Carrie's baby girl isn't explained or awkwardly folded into the narrative. The message is to relax and take things in stride, which is why it's best to wash Today's Special down with multiple pints of King Fisher or your favorite libation from the subcontinent.