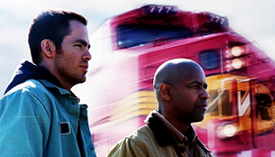 So the runaway train bit feels a bit familiar, huh? And it seems like just a year ago Denzel Washington and director Tony Scott were caught up in a sort of similar subway train movie? None of this matters because the pair is back on screen with the wildest ride of 2010, a runaway train loaded with hazardous chemicals that threatens to derail an entire city unless two engineers can find a way to stop it. Washington and co-star Chris Pine are great together, and up to the task for the unbelievably intense action, pulse-pounding excitement and pure adrenaline high this movie delivers. Audiences looking for real escapism in their fall movie fix will line up for what should be a runaway hit.

The similarities to the afore referenced The Taking Of Pelham 1 2 3, along with any number of B movies and TV flicks quickly dissipate as this nail-biting tale, "inspired" by true events, takes hold. When an engineer (Ethan Suplee) puts a train on high-speed cruise control and then ditches the vehicle altogether, his female supervisor, Connie Hooper (a solidly convincing Rosario Dawson) stands in a control booth and tries to bring calm to the growing disaster. Connie is simultaneously tasked with handling corporate politics in the form of her boss (Kevin Dunn) and an inspector (Kevin Corrigan) as this train flies nearly off the tracks. The real action, however, is centered on another train, where Washington and Pine soon find themselves on a collision course with fate and the speeding freight; it's their easy camaraderie and chemistry that keeps this thing on track. Eventually their heroics take center stage but the somewhat implausible and breathtaking action does not overwhelm the narrative or the human element that Scott and screenwriter Mark Bomback have created. With all sorts of obstacles, explosions and predicaments in their way there's no room for the audience to relax once the loco gets motivated. Intercut with all of this in almost documentary fashion are running news reports courtesy of Fox News of course—you didn't think 20th Century Fox was going to pass up an opportunity for built-in synergy did you?—and that just adds to the urgency and dramatic tension Scott so masterfully at develops.

All tech credits, from Ben Seresin's vivid cinematography and Chris Lebenzon and Robert Duffy's tightly knit editing, to outstanding visual effects and sound work really make this thing cook. It's visceral filmmaking at its popcorn best. Washington doesn't break any ground here with his laconic portrayal of a grizzled vet of the tracks but Washington fits the bill perfectly even while letting Pine carry the heavy load. Pine again proves he is an action star, really making us root for his character as his own domestic problems are slowly revealed. Climb on board for the ride.