close
Strictly for the kids

Alvin and the Chipmunks: The Squeakquel 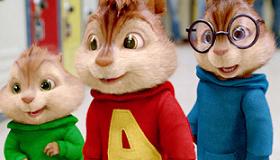 They're b-a-a-a-ck! Alvin and his chipmunk siblings Simon and Theodore have been around in one form or another for over 50 years and now, two years after 2007's Alvin and the Chipmunks posited a creation myth for the latest edition of the rodent band of brothers, the threesome returns in Alvin and the Chipmunks: The Squeakquel. In this latest adventure the urbanized, furry, woodland creatures take a break from their glamorous lives as pop stars to enroll in high school. This one’s aimed squarely at young children with only a few more grown-up asides thrown in to amuse restive parents. With very little competition in theaters for the family audience beyond The Princess and the Frog this mix of animation and live action should translate to very merry box office returns this yuletide season. Determined that the chipmunks lead a normal life—or at least as normal a life as talking animals can have—their friend and guardian, Dave Seville (Jason Lee), insists that Alvin (Justin Long), Simon (Criminal Mind's Matthew Gray Gubler) and Theodore (Jesse McCartney) enroll in high school. With Dave laid up in Paris after an accident, the boys end up in the care of Dave's well-meaning, pathologically shy, slacker cousin Toby (Zachary Levi), who is no help when high school turns out to be a living hell for nerdy Simon and Theodore. Alvin's experience is happier as the little egoist turns football star, although that creates tension among the brothers when the sport causes him to miss performing with them in a singing competition. At the same time, romance enters the picture when The Chipmunks' swoon over the Chipettes: Brittany (Christina Applegate), Jeanette (Anna Faris) and Eleanor (Amy Poehler). The Chipmunk’s slimy former manager, Ian (David Cross), represents The Chipettes, and Ian’s hoping his latest discovery will eclipse his former clients. Its young target audience will find this latest Chipmunks iteration entertaining. The story is simple enough for little kids to follow and at 88 minutes the movie does not wear out its welcome. And though the computer animated figures still register as bizarre to anyone old enough to remember the old cel animation cartoons, younger kids are only likely to perceive these chipmunks as an amiable, even cute, bunch. Sensitive, sweet-natured Theodore, so quick to fear and tear, oozes the cuddliest charm of the lot. For adults, the movie holds far less appeal. The story is too simplistic and most of the jokes are pitched squarely at 6 year olds. There are a few grown-up laughs but not enough of them to sustain an entire movie. At least the soundtrack is pretty funny, particularly the opening number when The Chipmunks rip their way through The Kinks' "You Really Got Me," an idiosyncratic, if not downright oxymoronic, combination. Those small moments ought to be enough to get most parents through it with their sense of humor intact. At least it’s not in 3D—the rambunctious Alvin popping out of the screen would be too much of an obnoxious thing, something for the producers to consider as they inevitably plan Alvin and the Chipmunks: The Threesqueakquel. Distributor: 20th Century Fox Cast: Zachary Levi, David Cross, Jason Lee, Justin Long, Matthew Gray Gubler, Jesse McCartney, Amy Poehler, Anna Faris and Christina Applegate Director: Betty Thomas Screenwriters: Jon Vitti, Jonathan Aibel and Glenn Berger Producers: Ross Bagdasarian Jr., Janice Karman Genre: Family/Animation Rating: PG for some mild rude humor. Running time: 88 min. Release date: December 23, 2009