close
Both predictable and perverse 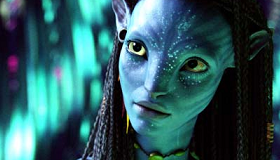 James Cameron writes solid—not surprising—scripts. Spoiler alert! In Titanic, the ship sinks; the real drama happens in the small moments that happen before, during and after. Avatar is both incredibly predictable and incredibly perverse. Not only does Cameron blur the line between reality and CGI, he's at once jingoistic and anti-hawk. Right-wingers will feel welcomed in the first half, the left-brained will be vindicated by the climax. But both groups will pony up buckets of cash to see what pledged to be—and is—the spectacle of the year, and even just shy of three hours it's a hell of a lot more whiz-bang fun than bread and circuses.

Though Cameron's reputation is for decadence, his stories are always grippingly elemental. Here, we have a crippled ex-Marine named Jake (Sam Worthington, dull but serviceable) asked to take his dead twin brother's role in an expensive and dangerous genetic experiment. His brother spent three years earning a PhD in the language and culture of the Na'vi, a slender, strong, long-tailed blue alien culture that’s learned to survive on the violently beautiful planet of Pandora. From space, Pandora looks a lot like earth. Up close it does too, but the resemblance clearest in the mining regions that the U.S. Military (now merged with the economy) has trampled with 10-story bulldozers. Through a biological link, Jake can step into his brother's shoes (or really, bare feet) as an operator of a Na'vi spawned in a lab from his brother's DNA.

Jake isn't an anthropologist; he's a moron. And if you think I'm being cruel, that's literally his sole defining trait (and nickname) in the movie's first third. He's a headstrong, self-described jarhead dying to regain the use of his legs, even if those legs are 7 feet long, alien and blue. So what Cameron gives us is a boy who simply wants to run, thrown onto a planet where three groups battle for his heart and mind: Sigourney Weaver's bio-cultural researcher (his ostensible boss), Stephen Lang and Giovanni Ribisi as the initially charming military-industrialists (and Jake’s real bosses) who want Jake to infiltrate the Na'vi and kick them off their land and Zoe Saldana as the Na'vi princess Neytiri who slowly falls in love with this idiot that both her parents and her land have asked her to protect. This heedless jock just might be crucial to her culture's survival. Okay, fine, he is. But as always with Cameron, the film's destination isn't his goal.

Both Lang and Ribisi are trying to mine a mineral Cameron bluntly calls 'unobtanium' from underneath the Na'vi capital. Priced at $20 million a kilo, it's the sole motive behind earth's invasion of Pandora. Even before they grunt buzzwords like "shock and awe" and "preemptive attack," this is clearly a three-year, $300 million rebuke of Dick Cheney. (And if that price tag sounds outrageous, it's the cost of one day of the ongoing War on Terror.)

Though it's set in 2154, Cameron's flick is so set in the present, it's actually set in the past. Characters even reference jujubees and Ranger Rick—things that were practically extinct two decades ago. When Ribisi exclaims, "Look at that cheddar!" he sounds like Jay-Z circa 2001. The Na'vi are untouched by the rappers of the 21st century, but their lines are lifted from centuries of Buddhist texts about respecting the cyclical energy of life and death—stuff Ribisi dismisses as "tree hugger crap." Eventually, we learn that all the trees on the Internet are connected through their roots like a shared brain—or really, tree Internet—and Cameron pans across them (and watches their destruction) with reverence, a palpable love he also extends to the bioluminescent ground, the thickets of motion-sensing ferns, the humid air, the clouds of insects, down even to the dirt which the newly mobile Jake curls his toes into and sighs.

Cameron wants us to appreciate the world he's toiled to make. And it's beautiful. His Pandora is a revelation—truly a must see. (Suspect anyone who claims to be underwhelmed—they're jaded beyond hope.) But Cameron knows to give us long tracking shots that show off his creation instead of chopping it into a frenzy. Instead, he holds steady and piles it on, cramming casual moments like Jake and Neytiri hiking through the forest with details that fill every inch of the frame: the glowing moon, the swaying breeze, the humming flies, the dense leaves. You could say Cameron suffocates us with his enthusiasm, except he does so in a way that makes us want to come back for more.

Maybe it's because we're so agog at Avatar's beauty that it takes us a few beats to realize Cameron's slowly switched the game on us. Sure, the Na'vi kill for food and freedom, but they take lives with respect. (Well, at least the lives of their food.) We, like Jake, are seduced by the group’s humility in the face of every organism's right to live. But we're also on a planet heading towards war, where the metal death machines of the U.S. goliaths prepare to trample an indigenous people even though they've been warned the Na'vi alone are masters of the mountains, jungles and climate. (And you know that's never an easy route.)

Lang considers Worthington a traitor to his race. In a gleeful if incidental pun he accuses his soldier of abandoning his principles for "some local tail." His ladylove is brandishing a hell of a non-hensile posterior. I found Saldana's Neytiri a little too hippie and sinuous to equal the best of Cameron's ass-kicking femmes—by contrast, Sigourney looks killer even wearing a cardigan and pearls.

Through Neytiri's love for her planet, Avatar treats the death of a space coyote with the respect given Hamlet's mother. It also wastes the lives of thousands of Na'vi and Earthlings as easily as crumpled tissues. You can call that hypocrisy. Or you can look at the uncanny insight of Cameron's other works and ask yourself what he's up to? I think it's underestimating Cameron to claim he's unaware of the central contradiction of his ecological blockbuster. He's set up a conflict where he asks us to identify with the aliens killing people with arrows. Are we not men? We are. And we've been primed to feel the moral weight of death on both sides. (There's even a burning, six-legged, space horse straight out of Guernica.) If we've managed to keep our brains screwed on through all the stunning visuals, we're not going to check them when the first bombs go off. And that this applause-worthy battle keeps its feet on the ground (even when its fighters are on starships and dragons) is a feat bested only by its damn gorgeousness.