close
Who knew a schmuck could be so charming?

on December 03, 2010 by Barbara Goslawski
Print 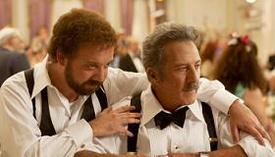 Barney Panofsky (Paul Giammati) is the quintessential everyman, and a hopelessly and helplessly lovable loser. Barney's Version is one of those rare films whose caricature of life illuminates, a vivid story of a topsy-turvy character so flawed you love him despite yourself. Audiences will embrace Barney and his ragtag inner circle of family and friends. Highlights include a series of scene-stealing—if not film-stealing—turns by Dustin Hoffman as Barney's shockingly candid, down to earth dad. Limited release of this title by Sony Pictures Classics should yield solid numbers for a prestige picture and possible Academy attentions should only serve to bolster its box office.

Barney's Version is adapted from the award winning autobiographical novel by Mordechai Richler, who died in 2001. Richler never shied away from unpleasant realities and this adaptation is surprisingly true to the spirit of his book. Barney is a second-rate television producer and die-hard hockey fan, a guy's guy who hangs out at the local pub and drinks too much as his idyllic family life passes him by. His life has been both too lucky and extraordinarily cursed. His first wife, a painter, committed suicide, while his second (played with alarmingly bitchy relish by Minnie Driver) drives him to the brink of double homicide. His life has been populated by extremes—extreme people, extreme situations and extreme reactions to these situations—but his reactions to this excess are undoubtedly true.

There is a honesty to these exaggerations. This is Richler's gift, and director Richard J. Lewis is smart enough not to mess with the formula, contenting himself if propelling these multi-faceted trajectories. The many plotlines could fill pages of soap opera script but there's no attempt at histrionics; it's all funny enough without melodrama.

Stumbling through life, Barney manages to meet his one great love. But in true bungling fashion, he meets her at his second wedding. Miriam, a guest, is an angel floating on air, played with captivating luminescence by Rosamund Pike.Realism be damned: Miriam is just one facet of a fantastic and fantasy-like existence.

Richler had a knack for creating unforgettable characters and this film will be remembered for its performances. Giammati's Barney is quite simply a marvel: a performance so nuanced and natural that it balances the comic and the bittersweet. Hoffman revels in the unmitigated audacity of his character; you may never again see someone of his calibre having this much fun and getting away with it on the big screen.