close
Something we should expect of the bargain bin 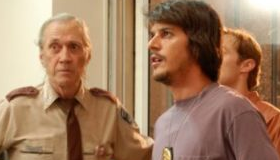 Originally made in 2007, this routine, low-budget horror/thriller/slasher flick should and would have gone straight to DVD if not for a better-than-average cast of cult film personalities. A negligible effort in almost every conceivable way, this film’s belated micro-release by New Films International is really a glamorized four-wall effort in the Roger Corman tradition, prefacing what should be a very quick transition to DVD.

It’s Christmas Eve and a generic nighttime city is in the grip of both rolling blackouts and a crazed murderer known as The Picasso Killer (Udo Kier), a slasher-cum-artiste who preys on vulnerable young women to maintain his palette of flesh, blood and body parts. Dominique Swain—Adrian Lyne’s erstwhile Lolita—is Christie, a waitress who nearly becomes another notch on the Killer’s paintbrush except that she looks just like the mysterious sketch he keeps tacked to his canvas. That momentary lapse of psychosis allows her to flee their encounter, taking refuge in an old building dubbed “The Hitchcock” (wink wink, nudge nudge) where the late David Carradine is doddering around as the night security guard. Throw in a few hunky cops, another blackout and a nubile young couple whose only purpose is to provide the sex scene that will garner it better overseas DVD sales and the stage is set for Udo to start carving up the joint.

It would be easy to give director John Keeyes and screenwriter Roy Sallows a pass for their obvious lack of resources if not for their persistent lack of imagination and effort. Anyone who’s ever trolled the halls of a film market has doubtless been exposed to hundreds of such pictures, all of which follow the same tired formulas. Only the amusing conceit that their film is in some strange way an homage to the works of Hitchcock and De Palma occasionally makes this feel like anything other than the hackneyed genre programmer it is. There’s some modest pleasure in watching Kier and Carradine in anything they do—even low-grade junk—but it’s short-lived and hardly any cause for this to get any kind of exposure other than a late-night cable airing.