close
Gulliver should be less hate-inspiring 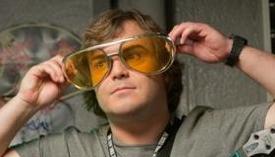 It's not hard to guess what attracted Jack Black to the 3D, big-screen adaptation of Jonathan Swift's satirical novel Gulliver's Travels. Where other than in Lilliput would the diminutive actor have the opportunity to tower over the 6' Billy Connolly or 6'4" Jason Segel? What's harder to gauge is just why Black, who serves as a producer on the movie as well as its star, thought turning the story into Jack Blackapalooza would be amusing. It's not. That may not be such a problem for the little kids who love the Kung Fu Panda man, but for their parents Gulliver will be a chore. Released at Christmas with the family home for the holidays, the film's deficits probably won't matter much at the multiplex. This is a film destined to make money.

At 41, Black is still playing the guy who never emotionally left middle school as Lemuel Gulliver, mailroom guy at a New York newspaper whose crush on lovely travel editor Darcy Silverman (Amanda Peet) leads him to con his way into a travel writing assignment—one that takes him to the Bermuda Triangle. The trip lands him in Lilliput, the territory of the tiny folk, where he befriends commoner Horatio (Segal) and earns the enmity of General Edward (Chris O'Dowd). He becomes court favorite of King Theodore (Connolly) and, indeed, all the land. Monuments are built in his honor and a big party—Gulliverpalooza—is planned. Gulliver repays their kindness by beguiling them with false tales of heroism, endangering his new friends when they come to trust his bravery.

Despite the contemporary spin, events in Lilliput hew reasonably close to Swift's tale. There's a bit of Cyrano de Bergerac thrown in as Horatio courts Princess Mary (Emily Blunt) with Gulliver's help. Segal is one of the best things about the movie. While the normally exuberant Connolly is more or less neutered playing straight man to Black, that same kind of relationship suits Segal. He is charming as the real romantic hero of the story. As for the humor, a lot of it is crude and a lot is just Black being his manic self. In both instances, the comedy tends to fall flat. A saving grace is O'Dowd as the petty, increasingly frustrated and fuming general. There are shades of Monty Python's late Graham Chapman in his delivery. His high dudgeon is something to behold, easily the most hilarious sight in Lilliput.

On a technical level, David Tattersall's cinematography is lovely. It is too bad that it is in the service of an effects-driven, 3D movie. There are moments when the CGI is only too obvious, but at least, given the material, those effects are necessary. The 3D, on the other hand, is pointless, used to no good purpose at all except for marketing at the box office. Pacing is another issue. The movie is only a shade over 90 minutes, but it is so slack that it feels much longer.
Casting Jack Black as Lemuel Gulliver was not a bad idea; what fails is the execution. The movie needed a better script than the one Joe Stillman and Nicholas Stoller delivered, one that would harness Blank's obnoxious energy to the service of the movie instead of turning it into a platform for a star's massive ego. A movie that ought to entice people to want to travel with Gulliver instead inveigles them to run from him.