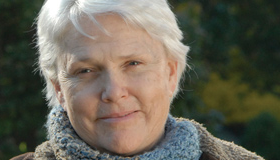 Two childhood girlfriends hide their early feelings of love for one another due to the bigotry of the inhabitants of their rural Michigan town. The more passionate of the two, Hannah (Sharon Gless), moves on to work in faraway places from Alaska to South America. She also comes out as a lesbian. Meanwhile, Rachel (Maureen Gallagher) stays put, gets married and becomes a devoted mother and homemaker. Over the years, Hannah overcomes various obstacles and returns to see her beloved Rachel. Their love for each other remains strong even as Rachel slips into a coma and her family refuses to allow Hannah to see her.

Hannah Free has a powerful message of tolerance with California's passage of Proposition 8 in recent memory as well as similar anti-gay marriage initiatives in other states. Allen (who also wrote the screenplay) also separates Hannah Free from other lesbian dramas by tackling timely issues of aging and health care. Its good intentions aside, Hannah Free is only entertaining and sensual in spots, a disappointment for everyone but the playwright's most ardent fans.

Like The Notebook, another tale of lifelong love, the sweetest moments in Hannah Free are its scenes of two older adults with deep affection for one another. Maureen Gallagher makes little impact as the older Rachel, meanwhile Ann Hagerman, as the "spirit" of Rachel who visits Hannah's bedside, comes off dull compared to Gless' firecracker personality.

Despite the confines of her wheelchair-bound character Gless has energy to spare, proving herself to be as irreverent and independent-minded as ever. Gless' involvement with the film—she’s also an executive producer—further emphasizes its worthy theme that family can mean many different things.

With much of the core drama revolving around an elderly, bed-ridden Hannah, Carlton (Brushfires) fails to bring much-needed energy to the storytelling. She also misses numerous chances to better capitalize on Gless' trademark sass.

Cinematographer Gretchen Warthen films Hannah and Rachel's story matter-of-factly with none of the artistry of standout lesbian dramas like My Summer of Love or Heavenly Creatures.

Allen, a playwright in residence at Chicago's Victory Gardens Theater, has written gay spoofs including Xena Live! And The Gays of Our Lives but Hannah Free lacks the comic spark that made past lesbian films Bound, Kissing Jessica Stein and The Incredibly True Adventures of Two Girls in Love arthouse favorites.