How Do You Know 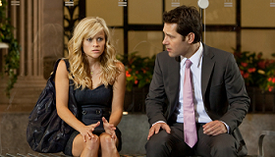 James L. Brooks is probably sleeping on a bed made of gold in a house made of diamonds on an island made of pearls thanks to his success as executive producer of The Simpsons. This may provide a modicum of solace as the disappointing How Do You Know fails to recoup its unjustifiable production budget of (reportedly) $120M. It's hard to believe Brooks has directed only half a dozen films, each featuring smart, spunky women whose lives he dramatizes with reportorial detail. In How Do You Know, that Oscar-winning eye for interaction and emotion has abandoned him and been replaced with something altogether phony. Even Reese Witherspoon, whose adorable scrunch-face projects the romantic travails of lovelorn women everywhere, looks unsure of herself as a former athlete torn between the millionaire womanizer (Owen Wilson) and the troubled nice guy (Paul Rudd). The four quadrant casting will bring in young women and a few guys, none of whom will be recommending this dispiriting lump of Christmas romcom coal.

From TV's Mary Tyler Moore to Oscar winners Terms of Endearment and As Good as It Gets, Brooks has enjoyed a magnificent career. As a writer/director he's long been an actress' best friend, crafting parts for women without condescension and with plenty of insight and laughs. That ship began to teeter with Spanglish and with How Do You Know his skills have diminished to the point where, while he's still better than some, he's officially running on reputation and fumes. From the moment Witherspoon's Lisa is revealed as the star softball player for the U.S. Olympic team, something feels amiss. Softball is a pretty lame pursuit for a romantic comedy heroine. Brooks isn't even using the sport to draw some thematic connection between athletics and love and the difficulties needed to succeed in both. Regardless, softball (just go with it) is Lisa's reason for living. So when she's cut from the national team for being, gasp, 31 years old, she's devastated. She's also unemployed and relegated to taking the bus, which makes you wonder if she shacks up with rich, conceited, Washington Nationals relief pitcher Matty (Wilson) because she's hungry and needs a place to sleep. Indeed, the hardships of being unemployed casts a low-key cloud over How Do You Know. The last time Brooks released a film was 2004, when the mouthwatering possibilities of profit at the expense of the national economy was beginning to give Wall Street the giggles. Here, his attempt to infuse an urban fairy tale with front page news about joblessness and, later, corporate malfeasance becomes just another contrivance. Both issues are worrisome to the honorable, handsome, middleclass George (Rudd). He's about to be unfairly indicted for stock fraud at the company owned by his father, Charles (Jack Nicholson). With the corporation's survival threatened, George is cast out, so he's in no mood for a blind date with Lisa, similarly devastated after being cut from the softball team. Their uncomfortable first meet-up is played out in total silence, a cute maneuver that ironically provides us the most chemistry the two leads demonstrate the whole film.

One of Brook's estimable talents is taking a tight group of characters and connecting them in ways that are warm, funny and real. Looking back on the William Hurt, Albert Brooks and Holly Hunter triangle in the wonderful Broadcast News¸ it's apparent what's missing here. Characters talk a lot, but what they're saying isn't adding up to much. For her part, Lisa is not proactive. She's a rather weak character, more so than Brooks probably envisioned. She moves in with party monster Matty and when he screws up, the smitten George appears for emotional comfort, until she begrudgingly returns to the smooth-talking ballplayer. As the high-living relief pitcher with shelves of morning-after clothing for his one-night stands, Wilson is the best thing in the movie. He's a cad, but in his own endearingly narcissistic way he's really trying. If only Wilson's smile, the one that makes women do things they know they shouldn't, could connect with Witherspoon's charm, which has been replaced with tentativeness, confusion and the exaggerated facial expressions of a sitcom comedienne.

With the characters not clicking and the laughs slowed to a trickle, Brooks' choices come under greater scrutiny. Rain-slicked streets, strung lights and extreme close-ups during emotional epiphanies—the coins of the romcom realm have rarely felt so counterfeit. The tough realities that bubbled under the smiley surfaces of his previous movies are non-evident. The film's only touching moment concerns a bedside proposal from Al (Lenny Venito), who resisted popping the question to George's assistant Annie (Kathryn Hahn) because he couldn't imagine such a great girl marrying such a jobless lug. Otherwise, the film gets too close in quality to the Katherine Heigl and Jennifer Aniston junk that Brooks is supposed to save us from. Late in the film, he spotlights a bus kiosk advertisement that proclaims, "Be part of health care reform." Whatever your political views, this is shockingly inappropriate for a film of this type. It could, however, be an indication of where Brooks can channel his efforts until he gets his mojo back.