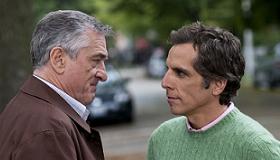 To say the franchise is coasting along on fumes suggests it once ran on a full tank, which may not even be true for Meet the Parents, the surprise hit that kicked off this broad comic franchise. In Jay Roach's 2000 lark, awkward bits like "you can milk anything with nipples" and "those are grandma's ashes" rubbed up against gags that grew less surprising as they got larger in scale. Gaylord a.k.a. Greg Focker (Ben Stiller) and his fiancé's loving but starchily Wasp family, the Byrnes', met the bawdy and casual Fockers in the sequel Meet the Fockers, and now the three couples are joined by a forth, a set of 5 year old twins, in Little Fockers. Greg finds a nearly comfortable relationship with father-in-law Jack (Robert De Niro) and in the process takes on the portion of Jack's qualities that aren't overbearing, threatening or espionage-related. This leaves room for both a new model of male authority and a fourth Focking film. While audiences should only be comfortable with one of those options, it's easy to see why they might return to these generic characters and their accessible circumstances-in ways we've grown up with them. So, while the jokes earn frequent groans and eye rolls, Little Fockers is comfortingly bland and smartly poised to take holiday dollars hand over furry-gloved fist.

Pam (Terri Polo) and Greg (Stiller) are about to move from a charming Chicago apartment to a house in the suburbs, just in time for twins Samantha (Daisy Tahan) and Henry (Colin Baiocchi) to have their 5th birthday party in their new backyard. Kevin Rawley (Owen Wilson) returns as Pam's investment-banking ex-lover, now clinging to Pam and Greg after a proposal of marriage left him spurned and lonesome. One of Kevin's other ex-lovers (Laura Dern) appears as the head mistress of The Early Human School, a high end elementary school that promises the Focker kids a great educational opportunity their parents have to swallow with a grain of granola. The new house payments and a looming private school tuition threaten to leave Greg cash-strapped, so when Jessica Alba appears as the pharmaceutical rep/party-girl, he's not-too-hard to talk into lecturing doctors about a Viagra alternative for heart patients. Jack of course finds the "boner medicine" and after confronting Greg about his suspected adultery, shares a disturbing genital moment in a bathroom that crosses Pulp Fiction with Stiller's own zipper scene in There's Something About Mary (not kidding).

In life, extreme intimacies deepen relationships; somehow this rule doesn't apply to Little Fockers. We should all feel closer to Greg and Pam, who have clearly developed into smart, sound parents, but I'm not sold we do. We should also feel closer to Jack, who literally dismantles his famous polygraph machine to defibrillate himself mid-cardiac arrest. That moment is a worthy signal of character evolution that's dethroned minutes later when Jack asks Greg if he's ready to be "The GodFocker." (None of us escapes that joke clean.) Taking from that reference, De Niro's Jack has a pleasing altercation with Harvey Keitel (playing a construction foreman) after Keitel's left a giant ditch in Greg's back yard. That these two acting colleagues argue over how to fill the ditch and don't address the option of burying mob hits in it is funnier than the fight itself. (It's a shame Al Pacino couldn't play the stiff. It's also a shame they couldn't cram in a reference to Mean Streets.) Bernie Focker (Dustin Hoffman), who goes to Spain in a Kramer vs. Kramer-like gesture of personal discovery (the film calls it "manopause"), saves the day in a lovely but feeble moment, however it's then we finally see how the goofy, bawdy, Focker model can work at the head of the family, and how Greg's messy stabs at adulthood were reasonable embarrassments in proportion to the security he earns and will offer his family thereafter. Little Fockers provides some lovely values for the holiday season; if only it could provide laughter with as much confidence.