close
A different look at the spirit of ‘76 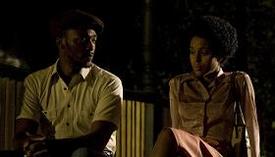 It's 1976, the Bicentennial summer in America, but in a Philadelphia neighborhood, the 1960s still cast a long shadow. When a former Black Panther returns, he stirs up old ghosts in writer/director Tanya Hamilton's assured feature debut. Nominated for an Independent Spirit Award for Best First Feature the same week it opens in select theaters, this intelligent, emotional drama should resonate strongly with fans of character-driven stories and those interested in tales of American political struggle.

Marcus Washington (Anthony Mackie) left Philadelphia with his reputation in tatters, suspected of snitching to the feds. Now that he's back he finds very little has changed. The small contingent of Panthers that remains in the old neighborhood greets him with threats and vandalism. Of more importance to Marcus is Patty (Kerry Washington), the widow of a late close comrade, who hasn't left Philly. An idealistic lawyer who, thanks to her penchant for defending the poor and disenfranchised, is barely scraping by, Patty won't discuss her late husband's violent death with her curious young daughter Iris (Jamara Griffin), but she has schooled the girl on FBI tails and wire taps. More distressing to Marcus, who quickly becomes fond of Iris and carries an obvious torch for her mother, is Patty allowing her slow-witted, teenage cousin Jimmy (Amari Cheatom) to hang around even as it is obvious that his inchoate anger is leading him toward serious trouble.

There is a lot to love about this film, starting with Mackie who is terrific as a man determined to leave the past in the past and move on with his life. The rest of the cast is fine, particularly Washington and Griffin, but this is Mackie's movie. Hamilton also deserves credit for creating an atmospheric film that effortlessly evokes place and time. She achieves this partially with a judicious use of archival footage of the real Black Panthers, which makes concrete the charged times Marcus and Patty survive. The rest is a result of meticulous attention to details like cars, clothing, hair, props and media: a Jimmy Carter speech blaring from the radio in one scene packs a specific punch. Hamilton also chose well for her music, hiring Philadelphia natives The Roots to compose a score that perfectly fits the period. (The band's Tariq Trotter also appears in a small role as Marcus' disapproving older brother Bostic.)

Though there are moments of great dramatic impact, there are also periods in the film that are a little static. That is a minor drawback that does not take away from what Hamilton has achieved. Night Catches Us is a wonderful distillation of an era and a political movement.