close
Not thinner than water 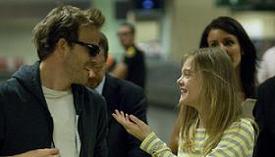 Somewhere watches movie star Johnny Marco (Stephen Dorff), bored with his life of excess, find meaning through his relationship with his daughter (Elle Fanning). A clearly personal effort, Somewhere demonstrates Coppola's featherweight touch with big subjects like identity and human connection. Like Lost in Translation, the film is about the consequence of treating important relationships too casually; unlike Lost in Translation, Somewhere depicts clearer consequences to the cavalier handling of such bonds. Coppola's characters navigate a world made of pretty but often hollow surfaces (Hollywood), it's almost difficult to see how the characters could have functional relationships in their context. (Who would have taught them the skills required for family interaction?) This film will only cement Coppola's indie cred and people will travel to see it in limited run. Oscar voters will take note. Box office should be strong.

Johnny Marco (Dorff) must be his stage name, regardless whatever identity he had before he's replaced with performances of stardom and decadence. His life is made of the shallow and meaningless play millions fantasize about and he just goes along with. He might see his daughter Cleo (Elle Fanning) with regularity, but his sense of self-importance has prevented him from paying much attention. When his ex (Lala Sloatman) says she needs to go away and can't say when she'll return, he's left dragging his 11 year old through his glamorous, R-rated life.

Cleo's a great kid: she watches her dad receive a goofy Italian TV award with a mix of pride and humor, she plays appropriately with him and his childhood friend (Chris Pontius) and she copes with her family's lack of stability. In sum, she's miraculously well adjusted. When one of Johnny's casual and nameless lady friends joins the pair for breakfast, Cleo's contempt is visible but quiet enough not to draw attention. She knows she risks too much making a fuss. She's practiced this restraint before and her resentment, focused at the intrusion of this stranger, suggests her opinion of her father's propriety. This kind of disregard won't be shaken off by dinner. At the end of her time with dad, Marco leaves her in a cab in the desert, bound for her summer camp; she's just as at sea in that moment as she ever was but it's then he realizes what he's been missing. Fatherhood isn't a roll with a script, and yet he's found a way to phone it in.

When the roar of a helicopter obscures the protagonist's apology to his daughter it becomes impossible to watch Somewhere and not see it as therapeutic measure for the filmmaker. (The director's father, Francis Ford Coppola is responsible for one of the most famous helicopter scenes in film history, and as such the context seems both sensitive to interrogate and neglectful to ignore.) Distinct from her father's work, Sofia Coppola has always owed a debt to surface-obsessed directors like Michelangelo Antonioni, but as her subject is so intimate and deeply felt the pretty moments feel self-conscious. I doubt anything is disingenuous but it does seem to strive for an Italian New Wave slickness that shows people having feelings without providing any point of entry into those experiences. Still, the film will find many loving viewers, and with good reason. Elle Fanning grows more impressive by the day and Stephen Dorff, who at first seems oddly cast, inhabits his role with the swagger of a wolf and the constitution of a sheep, all of which feels just right.