close
If it’s a designer impostor, it’s a pleasant one 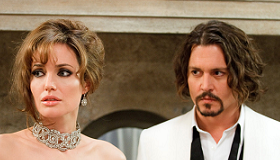 A remake of Anthony Zimmer, a 2005 French thriller, The Tourist is a throwback to classic movies like Charade and North by Northwest where beautiful, sophisticated people answer life-threatening danger with bon mots and ingenuity. If the plot is a little too easy to figure out and the dialogue not nearly as clever as its screenwriters think it is, there are compensations, beginning with the film's glamorous stars Angelina Jolie and Johnny Depp. A crowd-pleaser aimed squarely at adults, it may not garner the outsized grosses of more family friendly fare, but it should add a healthy total to the holiday box office this season.

Comparisons to Charade are not overstated, for like that classic's star Audrey Hepburn, Angelina Jolie is a beautiful woman who looks even more ravishing with couture hanging from her skeletal frame. And like that movie's heroine, Jolie's Elise Clifton-Ward is a woman in danger. In this case, it's because both Interpol and mobsters are after her, hoping she will lead them to her boyfriend, a money launderer who stole billions from his gangster employer Ivan Demidov (Steven Berkoff) and who is rumored to have paid a plastic surgeon millions to give him a new face. When Elise attaches herself to American math teacher Frank Tupelo (Depp) on a train to Venice, the befuddled sightseer quickly becomes the startled subject of a hot and deadly pursuit.

James Newton Howard's score tries to recreate the evocative style of golden era suspense, but only manages to be cloying. As mentioned previously, director Florian Henckel von Donnersmarck and his collaborators Christopher McQuarrie and Julian Fellowes never quite achieve the cosmopolitan wit to which their dialogue aspires. Paul Bettany has the thankless role of a mopey Interpol agent, while Timothy Dalton adds sparkle as his scornful superior. Most of the remaining supporting roles are on the pallid side, although Rufus Sewell adds a dusting of suave charm in a cameo that marks one of the movie's smarter touches. As for the story itself, anyone with even a passing familiarity with Charade or the films of Alfred Hitchcock will figure out where it is all leading pretty quickly.

Ultimately, The Tourist is a B movie wrapped in A movie trappings, but its compensations far outweighs its faults, starting with its location. Venice does not have a bad angle and when the exteriors are its canals and interiors are five-star hotels and ballrooms, the city more than lives up to its reputation as a city for lovers. It is completely seductive. And when the people falling in love are Depp and Jolie, the romanticism goes into overdrive. Their chemistry is a delight to watch. As befits a movie that pays such loving homage to thrillers of the past, this is an old fashioned star vehicle and von Donnersmarck picked exactly the right stars to drive it.