close
In this film, misery is a wonderful thing 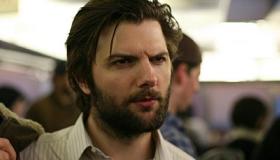 When a college kid brings his girlfriend home and the nuclear family gathers for the Thanksgiving holiday in Lee Toland Krieger's funny, caustic The Vicious Kind, the results are predictably explosive. What lifts this trenchant dramedy out of the ordinary are Krieger's ear for dialogue and Adam Scott's breakthrough performance as a family's black sheep seemingly intent on earning that bad rap. Nominated for two Independent Spirit Awards for Krieger's script and Scott's acting, this 2009 Sundance Film Festival alumnus should resonate with fans of character-driven stories and anyone who appreciates dark humor. Box office returns look to be modest in limited release, but if those nominations turn into awards, the film's prospects may brighten.

If Peter Sinclaire (Alex Frost) stopped to think about it he might realize that taking his girlfriend, Emma (Brittany Snow), home for Thanksgiving and getting his older brother, Caleb (Adam Scott), to drive them there, is begging for trouble. But Peter’s in love and horny, and with his hormones raging he is not thinking about much other than the promise that he will lose his virginity over the holiday. That Caleb—smarting over his own break-up and loathing all women—is going to be trouble is evident from the start when he unloads a tirade on his brother damning women in general and Emma (whom he's yet to meet) in particular. To add to the toxic holiday recipe, Caleb and his father, Donald (the ubiquitous J.K. Simmons), have not spoken since the boys' mother died nearly a decade ago, and while Caleb and Emma profess to loathe one another there is a palpable attraction.

With Krieger's sharp lines to feast on all four actors make the most of their roles, but Scott still manages to run away with the film. It is partially the nature of the role, it’s a character written as tour de force, but it is also a case of an actor completely connecting with a part. The Vicious Kind would be a good movie without such a forceful lead, but with it, it approaches greatness. It does not completely live up to its title. Like those other dysfunctional family holiday movies, such as Home for the Holidays, Pieces of April and The Ref, its intention is not to leave the audience reaching for a razor blade. At the same time, its most memorable moments are those given over to Caleb's rants. His misery is a wonderful thing.