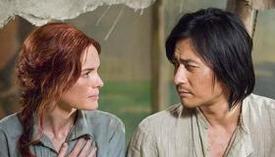 Korean writer-director Sngmoo Lee partners with a vast production crew and Korean star Jang Dong-gun to blend a fantastical Old West with villainous ninjas, anime-inspired backdrops and enough fight scenes to fill numerous martial arts movies. The Warrior's Way, from Relativity Media's Rogue division, is bloody counter-programming for fan boys (and girls) with zero interest in cuddly holiday fare like Tangled. Jang makes a handsome version of the stoic, Clint Eastwood-like journeyman and his international popularity will help the film attract a modest Asian-American fan base. Still, genre movies like The Warrior's Way are all about pleasing core fan boys. While the film claims dazzling visuals, Lee fails to deliver the type of never-before-seen martial arts fights fans demand. Despite strong social media efforts, including an iPhone app and Twitter feed, poor word of mouth among martial arts fans and even poorer reviews will cost Relativity Media any chance at solid crossover business. Expect box office less than the $38M total for the Warner Bros martial arts adventure Ninja Assassin, which was released during the holiday season last year.

Yang (Jang) earns the title of the world's greatest swordsman by eliminating all his enemies but for an infant girl, the sole survivor of his enemy clan. Yang refuses orders to kill the baby. With the infant girl in tow, he travels to America to escape from his mentor Saddest Flute (martial arts veteran Ti Lung) and the warriors known as The Sad Flutes who swear to kill him.

Yang lands in Lode, a once booming gold rush town currently inhabited by stranded circus performers, including a would-be knife thrower named Lynne (Kate Bosworth) and a town drunk named Ron (Geoffrey Rush). Yang takes over the town Laundromat once operated by a former friend and helps the townspeople fight off a disfigured villain known as the Colonel (Danny Huston). The problem is that when Yang uses his sword in battle, its magical sound signals his whereabouts to Saddest Flute and his warriors. Soon the ninjas are coming, and Yang isn't sure he can protect his new neighbors from harm.

Lee and his extensive tech team, including concept artist Brendan Heffernan, visual effects supervisor Jason Piccioni and costume designer James Acheson, make great use of the 45 sets built on six New Zealand studio spaces and 1,500 visual effects shots throughout the movie. Its standout images include ninjas leaping from a lotus pond and Yang teaching Lynne how to handle a knife under a Van Gogh inspired starry sky.

Credit Kate Bosworth for introducing a strong female character to the testosterone-heavy martial arts genre. Geoffrey Rush clowns amiably as the drunken Ron, although he's funnier as the pirate Barbossa in the Pirates of the Caribbean films, and at his best as an eccentric speech therapist in The King's Speech. Danny Huston enjoys impressive make-up effects as the Colonel, a cruel villain who hides his facial scars behind a creepy leather mask, but he never truly comes alive.

Jang, who starred in the hit Korean films Friend and Tae Guk Gi: The Brotherhood of War as well as Chen Kaige's Chinese epic The Promise, is handsome and charismatic, but Lee offers him little to do outside of swordplay. There's no doubting Jang's talents, it's a shame his English-language debut turns out to be The Warrior's Way.

Still, Lee is already at work on another movie, a Korean-Japanese co-production called Assassin. This means he has a well-earned second chance at writing a script equal to his technical talents behind the camera.