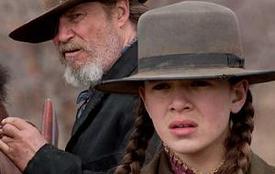 No one really asked for it and some may resist it, but Joel and Ethan Coen's splendid new adaptation of Charles Portis' novel True Grit rides with the great ones. The story of young Mattie Ross (Hailee Steinfeld) who enlists the services of cantankerous "Rooster" Cogburn (Jeff Bridges) and Texas Ranger Le Beouf (Matt Damon) to bring her father's murderer (Josh Brolin) to justice has been faithfully adapted for the screen. Smartly emphasizing Portis' quirky dialogue and dark comic tone, the Coens show the flare that made them famous. While the shadow of John Wayne's iconic Oscar winning performance in the 1969 classic looms large, Bridges makes the role his own and the Coens make the story their own. Purists may wonder ‘Why the remake?' but after seeing it will wonder no more. Although westerns have been few and far between in recent years, audiences and Coen fans should rally around this one with good, if not spectacular, box office success.

Centered around 14 year old Mattie's determination to find justice for her father's death, this character-based western gives attention to Portis' memorable exchanges and dialogue instead of hyped-up action scenes, (though there are plenty, particularly in the final third). Mattie, played in a no-nonsense way by scene-stealing Steinfeld, is a true original: she's independent, fiercely proud and endowed with a take-no-prisoners attitude. She and Cogburn make a formidable pair and they set out on a journey to exact revenge. This brings them in contact with unsavory characters and a reluctant third partner in Damon's Le Beouf (pronounced ‘beef'). The end result is somewhat predictable after all these years but "getting there" is very satisfying. The Coens have been stringently faithful to the book and their brilliant writing sounds natural coming out of the mouths of these colorful, oddball characters. Unlike the 1969 film, this version adheres closely to the spirit of the book, though the violence and the more over-the-top comic elements have been subdued in service of a PG-13 rating. Regardless, Coen aficionados will not be disappointed.

Very few actors would want to take on such a legendary and familiar role as the one Wayne so brilliantly inhabited, but Bridges, who worked with the Coens memorably in The Big Lebowski, shows no fear jumping into the skin of this cranky but heroic dude. Cogburn is a bigger than life creation, but Bridges dials him down, reins him in and lets him breathe. It's a great performance, as great as Wayne's, but in a different way. Damon is perfect casting and erases the sour memory of Glen Campbell's amateurish turn in the original. Brolin isn't in it much but fits comfortably into the shoes of the killer. Barry Pepper is a stand out among the cast of bad guys. As noted, Steinfeld is a real discovery and she manages to hold her own and prevail against actors performing at the top of their game. This really is her movie, but the touching relationship she forges with Cogburn makes it a pairing for the ages.

Technical aspects are flawless with special mention to Carter Burwell's nicely austere score and Roger Deakins' extraordinary cinematography. True Grit is a true winner, a triumph on every level for the Coen Brothers and one of the year's finest movies.