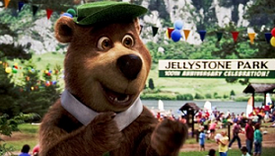 While the nostalgia reflex is a valid one, it's hard to understand why any animation studio would revive Yogi Bear; the Hanna-Barbera cartoon barely has a premise, even if the character is loosely modeled after someone as engaging as Ed Norton of TV's The Honeymooners. Warner Animation, apparently as particular with their projects as Anthony Hopkins, has stretched an already paper-thin premise to feature length, and to it they've added evil public officials, a deforestation subplot and a ranger-documentary maker romance that surprisingly avoids the meta (you know, because kids might not get that). It's more likely grandparents will take their kids to the film than parents, but regardless word of mouth will rain all over that pic-a-nic and douse whatever box office promise this long-anticipated revival might have held.

Even the presence of Dan Aykroyd as Yogi and Justin Timberlake as his pint-sized straight man Boo Boo can't save the movie (though Boo Boo does have one decent moment). The power-hungry Mayor Brown (Andrew Daly) has incrementally sold off the public works of the town to build his wardrobe, and with the gubernatorial election only seasons away he sets his sights on Jellystone National Park. Home to 100 year old trees, natural wonder and one Smarter-Than-Average bear, Mayor Brown hopes to sell the trees to loggers and "turn that town deficit into a surplus!" When the park's centennial celebration is interrupted by a minor catastrophe involving Yogi and water-skis, two questions arise: 1. Should anything really strain credulity in a film about a talking bear? 2. Does the world (of the film) need to be protected from the innocence-shattering powers of a talking/stealing/exhibitionist bear? (I suppose so.) Besides the fire works disaster that followed Yogi's stunt, what could prevent Ranger Smith from making Yogi the attraction that saves the park? Inquiring minds sort of wonder. Or at least, inquiring minds ask themselves things to survive the film's lack of humor and embarrassing use of 70's corporate rock.

Rachel (Anna Faris) enters fray as a nature documentarian that (telegraphing the solution to all the film's conflicts) outfits Boo Boo's bowtie with a miniature camera to "capture the real wilderness," or some such nonsense. As G-rated affections brew between Ranger Smith and Rachel, Fox News level politics fly high with the villain. Kids should like the heroes and hate the baddies just on the grounds that one pair functions at their level and the other is talking strip malls and deforestation.