You Wont Miss Me 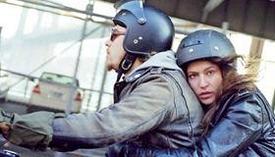 An uncomfortably honest portrait of a slow mental breakdown in self-consciously bohemian, twentysomething Brooklyn, Ry Russo-Young's You Wont Miss Me is so earnest the title's missing an apostrophe. Despite interludes that oversell invocations of Andy Warhol and (especially) Wong Kar-Wai, most of this is long-take drama, one freak-out at a time. As Shelly Brown, Stella Schnabel is a convincingly abrasive, selfish post-collegiate woman on the edge; if her problems seem self-created, the movie still compellingly doesn't look away. Commercial prospects will be limited, as even people who recognize the accuracy of the portrait may not want to spend time with such a person.

Plot is limited to Shelly's increasing freak-outs and breakdowns: the dramatic highlight consists of Shelly and friend traveling to Atlantic City to see and seduce buzz band The Virgins. Shelly's failure leads to a long, freakishly histrionic hotel room confrontation that's as unsparingly convincing as it is deeply unpleasant. Where everyone's money is coming from is carefully left unstated, but this is a milieu full of people with seemingly no jobs, at full liberty to do drugs, stay up late and freak-out at will. The movie takes this as a given rather than an important detail: this is a portrait that's implicitly both specific and universal to the post-collegiate experience, a pretty sloppy assumption.

Russo-Young's dramatic scenes are better than the footage that breaks up the film: some of it's just lazy art-school doodlings (Russo-Young photographing Schnabel in Factory poses), some are straight Wong Kar-Wai rips (Shelly riding a motorcycle in slow-motion, her arms thrown to the air) and some is footage of Schnabel getting kicked out of hotel lobbies (seemingly vérité in-character footage, with faces blurred out). She's better at focused dramatic scenes and, in one intriguingly meta detour, an audition for a director (Quiet City and Cold Weather director Aaron Katz) opposite an auditioning actress (Greenberg's Greta Gerwig) that turns into a bizarre face-off.

Despite those names, though, this is far from the traditional terrain of films lumped together as mumblecore: overtly confrontational and proudly abrasive, You Wont Miss Me doesn't so much anatomize as indulge its heroine. The film could stand a greater dose of self-awareness, but perhaps that very lack of perspective allows for its more convincing passages. Like The Break-Up, this is a well-done look at people who may not deserve such close scrutiny.