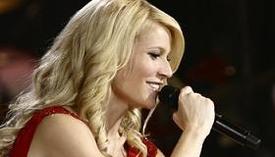 Country music makes for great melodrama. Its fans believe that a comeback is a Christian right; their superstar transgressors are forgiven faster than an ex-con rapper can yelp "Free Weezy!" Writer-director Shana Feste's drama tracks a three-show tour where a stadium-filling alcoholic (Gwyneth Paltrow) self-destructs before her husband (Tim McGraw), ambitious opening acts (Leighton Meester and Garrett Hedlund) and the state of Texas, all of whom still remember when she fell off a stage, miscarried and flung herself into rehab. (The Heartland pardons her lost child only because most are too polite to mention it.) Both sincere and cynical in its view of country stardom, Country Strong is a charmer that makes you forgive all of its false notes simply because the talent plays them with conviction. The crowds who cheered for last year's The Blind Side and rallied for Crazy Heart will help it make a little noise at the box office.

Gwyneth Paltrow is curious casting to play disgraced singer Kelly Canter—she's associated more with microgreens than Merle Haggard—but she's got the long legs, blond curls and big smile of a six-time Grammy winner. In fact, she bears a passing resemblance to movie husband Tim McGraw's real life wife Faith Hill (Grammys: five). Kelly and husband James partnered up as teens: she sang, he booked the shows. Decades later, the tabloids still say they've got "the best marriage in country music," though Kelly's got a cheating heart and James' favorite mistress is money. (One hopes the McGraw-Hills, subjects of the biographies Faith Hill & Tim McGraw: Soul 2 Soul and Perfect Harmony: the Faith Hill & Tim McGraw Story, are faring better.) When we meet Kelly she's already pale and drained from her stint in rehab, and though James has shoved a mic in her hand, we know the curtain has dropped on her best days on the stage. Still, we see flashes of who she used to be: winning over a tough press conference, charming a boy with leukemia, writing smart lyrics on the spot, ordering her hairdresser to tease, tease, tease. In these moments, she still moves with a rarefied ease. Every other minute, she's a mess.

To really understand Kelly's past, look to her opener Chiles Stanton (Leighton Meester), a beauty queen who makes success look easy. With her sweet voice and guileless PR act (she's very sincere about her faux naivety) Meester's got that glow about her that makes record executives smile. She's pure pop country and primed to get swept up into the machine. By contrast, fellow opener Beau Hutton (Garrett Hedlund) has the skill and the soul, but is too authentic to care about cash. A magazine deemed him the second coming of Townes Van Zandt, the flagrantly anti-fame songwriter who drank himself to death at 52. (It also dubbed Meester the new Carrie Underwood.) Hedlund was the male ingénue in Tron: Legacy, but couldn't hold his own against the flashing lights and pummeling visuals. Here, in this quieter, simpler flick, we see he just might be a movie star. When not smothered by a synthetic extravaganza, Hedlund's very casual, almost offhand, in front of a camera. He's got a killer grin and scraggly chin scruff that his agent should let him keep, if only to distinguish him from every other buff, blue-eyed what's-his-face.

As the foursome travels between Houston, Austin and Dallas for Canter's comeback tour, they flirt and argue with savage selfishness. Shana Feste doesn't trust us to understand their struggles—she even tacks on a baby bird meant to represent Canter's failed motherhood—but while the cast gives in to her need to play it big, they pass off the clunky lines as people play-acting at their own emotional honesty. In one powerful scene, James walks away from his wife to sit and think and the supposed villain comes into focus as a man quietly carrying his own pain. These two couples are written flat, but in glimpses we see that they're flawed and full; as Jeff Bridges did for Crazy Heart, this cast is feverishly giving life to schlock. ‘Course; sometimes there's a time for schlock, especially when it sings.