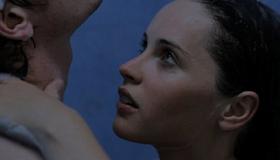 We live in an accelerated media age but it's still amazing how rapidly the implacable elliptical syntax of 2010's Blue Valentine has been married to meaningless piffle. Young romantic agony has been a market force going back at least as far as suicide pop ballads like "Endless Sleep" from the 1950s and '60s, so there is definitely a constituency for Like Crazy, and Paramount was probably wise to pick this one up at Sundance for a relatively sane $4 million.

But protagonists Jacob and Anna are no Romeo and Juliet, despite writer/director Drake Doremus' fraudulent but manful attempts to make them seem so —at the end of the day, their problems could be solved by a plane ticket and less self-involvement. A surprising follow-up to Doremus' low-fi but equally concept-driven 2010 Sundance feature Douchebag, Like Crazy has appealing performances, a notable tone of realism in the acting and so many borrowed mannerisms from better or more interesting films it feels like a YouTube mash-up made by a Wes Anderson junkie who's studying Sophia Coppola movies while writing a term paper on Garden State.

Jacob (Anton Yelchin) and Anna (Felicity Jones) are two college students in LA on the cusp of graduation. We are in the realm of writerly convenience from the first scene, where Jacob is shown to be Anna's writing class teaching assistant, even though he has no real verbal facility and is majoring in something called "Furniture Design." He's an American, she's a Brit, but they fall in love and, in the first of about nine romantic montages, go to a theme park, kiss in the moonlight and even achieve cliché Nirvana by running along a beach.

Montages exist in Like Crazy to paper over the shallowness of the characterizations, and there's a kind of desperation in the first-year-of-film-school multiplicity of collage techniques. You would think Doremus just invented the intervalometer with the way he alternates between slow motion and time-lapse photography. There's also a lovemaking montage done entirely as a series of Polaroid photos that's supposed to convey Anna and Jacob's great physical passion, but mostly makes you marvel at the couple's overlarge collection of bed sheets.

Tension arrives in the form of immigration difficulties after Anna overstays her student visa so she and Jacob can spend the summer together. The couple breaks up five or so times (it's difficult to say exactly since the actual break-up scenes are never depicted), but theirs is a Big Love, a Love That Never Dies and Dare Not Speak Its Name. So—maddeningly—the couple always reconciles just in time to let trivialities drive them apart yet again.

It's symptomatic of how fraudulent this movie is that within a year or so of graduation, at a time when most students would be low man in an office and sweating out the first payments on educational loans, Jacob, who literally seems capable of designing only one kind of chair, has a thriving furniture company and lives in a cool and spacious artist's loft, while Anna is a rising journalistic star on her way to being made a "junior editor" for what is apparently the only magazine in all of publishing that's still hiring. There are some wonderful acting moments salted onto the dross. The radiant Jennifer Lawrence manages to register in a thankless supporting part, while Felicity Jones in particular is so believable pantomiming the giddiness of first love that you're almost willing to believe in Anna and Jacob as characters before the moment gets swept away by another montage.

People who mistake imitation Coldplay guitar crescendos for deep emotion may find themselves deeply moved by this callow nonsense, but soap opera is soap opera, and suckers are suckers. I'm sure people cry while reading bodice-ripping novels with Fabio on the cover too, but that doesn't transform those books into Anna Karenina. All the tears in North America will never make Like Crazy anything other than a variation on Dear John that is far more mannered, and therefore even less sincere.