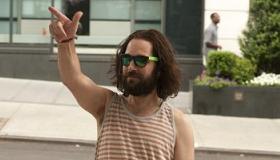 On day four of the 2011 Sundance Film Festival, the Paul Rudd vehicle Our Idiot Brother scored the biggest deal to date when the Weinsteins, partnering with billionaire Ron Burkle, paid $6 million for the rights and promised to pony up another $15 million for prints and advertising. It seems like a shrewd investment, as Jesse Peretz's comedy about a well-meaning slacker accidentally creating chaos for his three sisters is a wonderful vehicle for Rudd's humor and considerable charm. The Weinsteins are evidently optimistic, planning to open the movie during the busy summer season.

Ned Rochlin (Rudd) is an organic farmer and a sunny optimist. Insistent on seeing the best in everyone, he makes a stupid decision and lands in prison for it. The short stretch costs him his girlfriend (Kathryn Hahn), his home, his job and even his dog, Willie Nelson, leaving him little choice but to turn to his mother (Shirley Knight) and sisters for help. Liz (Emily Mortimer) has a 5 month old daughter, a 7 year old son and an obnoxious husband, documentarian Dylan (Steve Coogan). Demanding, self-absorbed writer Miranda (Elizabeth Banks) is on the verge of a big break with her first high-profile interview for Vanity Fair. Natalie (Zooey Deschanel) is trying hard to put her promiscuous past behind her now that she's in a serious relationship with lawyer Cindy (Rashida Jones).

Ned's sudden intrusion into their lives isn't completely unwelcome—they love their brother even if they don't understand him at all. It's just that guileless Ned is incapable of lying and has a tendency to blurt out the truth. "I like to think if you put your trust out there, people will rise to the occasion," he says. But his siblings see that lack of tact as a betrayal and his innocent observations upset their carefully arranged lives; they never stop to consider it's perhaps their arrangements that are faulty.

Our Idiot Brother seems a slight variation on Rudd's comedy from last summer, Dinner for Schmucks, but here Rudd plays the schmuck. Ned is not an extreme character like Steve Carell's was in Dinner (Ned's merely a hippie and a stoner) and Brother isn't as mean-spirited, but the arc is similar with the happily clueless intruding on the lives of the hopelessly uptight.

The movie makes a fine addition to the dysfunctional family comedy genre. The entire family, with the exception of the obnoxious Dylan (Coogan), is likeable even when behaving badly. Where the movie hiccups is with characters that are not part of the Rochlin clan. Hugh Dancy is wasted as an artist friend of Natalie's who tries to get her (and Ned) to join a cult. T.J. Miller is one-dimensional as Janet's new, even more easygoing boyfriend, and the normally funny Hahn is stuck in the film's one nasty role and not a terribly well-written one at that. The exception to this is Adam Scott as Miranda's unpublished sci-fi writer friend and neighbor, a role that uses Scott's dry wit to its best advantage.

But this is Rudd's movie and he once more displays an unerring eye for comedy. He comes at it from an actor's perspective rather than a comedian's and it shows as his character as hilarious as he is credible. Ned Rochlin may be an idiot, but he's an idiot we'll be happy to spend time with.