close
2011 begins with this amiable action time-waster as Ron Perlman headbutts the devil.

Season of the Witch 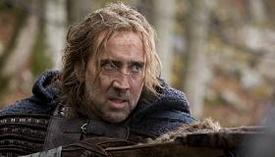 Director Dominic Sena and actor Nicolas Cage reunite for the first-time since 1999's Gone In Sixty Seconds for an amiable if mostly unexceptional action movie to kick the year off. January is the month of low cinematic expectations, and Season Of The Witch—with its inept CGI, absurd medieval setting, au courant exorcism sequence and clunky dialogue—lives right down to them. With Nicolas Cage on blank-line-reading autopilot, it's up to Ron Perlman to elevate the film from dull to enjoyably silly in this tale of former Christian knights taking a possible-witch and plague starter to be judged. Though it slows down in the back half, the opening acts of Season are reasonably entertaining; bored audiences could make this film a little money, despite Cage's recent stream of flops.

Cage is "Behmen," Perlman "Felson"; two more anachronistic presences for the 14th century setting couldn't be imagined. Though some of the dialogue strives for historical paperback status ("We've seen much death, you and I" and so forth) Perlman mostly dispenses with that status. Keenly aware he's in a ludicrous movie, he quickly sets about enjoying himself and responding anachronistically to everything around him. ("Let's get the hell out of here," his Christian knight declares at some point.) Once, after an especially portentous Cage line reading ("I serve only God") Perlman mocks Cage's delivery.

Surrounding Cage and Perlman is an unwieldy plot that begins with a prologue depicting the proper process for the exorcism of witches, then flashes forward to a montage of some twenty years of Cage and Perlman fighting side by side for God's glory. Years ago, Paul Verhoeven planned a since-abandoned project to depict the Crusades on film, and this film's disgust with vast amounts of holy slaughter sort of fulfills his stated goals.

Yet when Cage and Perlman agree to help transport an accused witch to a monastery to be judged, the film quickly makes it clear that the girl is, at the very least, deadly; it's another variant on the venerable "kill the bitch" sub-genre (call it "kill the witch"). As the stakes rise, time for buddy-comedy drops; the jolts are too minor to register, the action mostly unimpressive. Structurally, the film's essentially a Western, with a band of characters thrown together on a long, dangerous journey. All the disparate elements floating around never gel into anything more than silliness.