close
A comedy with dramatic overtones. Or maybe the other way around. 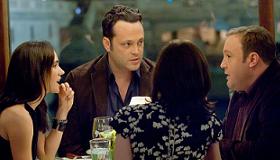 There are many puzzles to be solved in the contemporary social comedy The Dilemma. The most pressing is how director Ron Howard, who has tackled difficult historical and biographical material with slick, Oscar-winning professionalism, could miss such an easy lay-up. You can't fault the production. This is high-gloss stuff, very well shot with a fairly grown-up performance by Vince Vaughn as an automotive entrepreneur burdened with the knowledge that his best friend's wife is cheating on him. The central question for the characters is one of honesty. The central problem with The Dilemma is one of trust. Howard trusts the movie's darker and more satisfying dramatic elements so little that we come to resent the comedic content deemed necessary to keep Vaughn's bro-hugging fans in their seats. Even though The Dilemma fails as a whole, there's enough ethical brain teasing and character-based conflict to warrant an unenthusiastic recommendation. Look for an okay opening followed by mediocre word of mouth.

At 6'5", Vince Vaughn isn't just a tall drink of funny. He's a hurricane of flip asides and sincere sarcasm. He'll double talk his way out of anything and his ability to surprise us with a line reading can reach Walken-esque heights. The force of Vaughn's aggressive presence can subsume a movie, which is usually welcome because he can be so damn entertaining. In The Dilemma, the mile-a-minute humor remains, yet his commitment to his character, Ronny Valentine, outpaces any desire to be snarky for snarkiness sake. Ronny runs the B&V Engine Design company with partner and college best friend, Nick (a lightweight Kevin James). The pair is on the verge of landing a deal with Chrysler that would put their business on the map and allow for eternal bachelor Ronny to propose to girlfriend Beth (Jennifer Connelly). Even with the help of Susan, a phallic-obsessed car consultant (a wasted Queen Latifah), Ronny and Nick are under enormous pressure to deliver their product on time. While scouting an arboretum as a place to pop the question, Ronny spies Nick's wife Geneva (Winona Ryder) making out with another man. To devastate the overworked Nick with news of Geneva's paramour would make it impossible to close their big money deal. Not telling Nick means keeping a major secret from his best friend; hence the movie's title.

The Dilemma was written by Allan Loeb, the writer of Wall Street: Money Never Sleeps. The two scripts have little in common, except they both require sturdy architecture. In this film, the four primary roles need goals and characteristics that cleanly connect and conflict. Loeb basically provides that, although Ronny's gambling addiction is too heavy a burden for this movie to carry and is ultimately an artificial way to get everyone in one room for the final blow up. Before the inevitable fireworks, Howard and Loeb start light. After catching Geneva in extramarital lip lock, Ronny pratfalls into a batch of poisonous plants and his made-up explanation to Beth is accompanied by pithy, color-treated flashbacks. Soon, a pile-up of complications conspires against Ronny. He tells Geneva he knows about her affair. She responds by threatening to reveal a sordid piece of his past that could ruin his relationship with Nick. Indeed, the movie is tough on Ronny. The screws turn throughout, but too often Ronny's solution is a contrived situation that strains for laughs. For a tattooed, pill-popping example of what's so frustrating about The Dilemma, look no further than Zip. The object of Geneva's affection, Zip (Channing Tatum, not bad under the circumstances) attacks Ronny with a baseball bat after Ronny takes photos of he and Geneva together. Zip can't be hurt, you see, because he's hopped up on OxyContin. He's sensitive, you see, because he loves his exotic pet fish. He doesn't work as a character, you see, because he's poorly conceived to service the movie's worst instincts.

It's been years since Howard directed something other than a prestige picture or franchise blockbuster. So it's bizarre he would have such a problem deciding if he's making a comedy, a drama or a comedy that slowly reveals its darker side. The hijinx get deflating, yet the tension and genuine sense of investigation keep you involved. Credit Connelly for some of this. The Oscar-winner (A Beautiful Mind) pulls the movie down to earth in every scene she's in. Her disappointment and confusion after Ronny ruins her parent's anniversary party with his passive-aggressive (and funny) toast, reminds us we haven't completely lost interest in the stakes. These stakes are established in the very first scene with the question, "how well do you really know someone?" The crucial query for The Dilemma is how well does it know itself? Here's a film that toys with its darker side, but lacks the nerve to go where the material is taking it