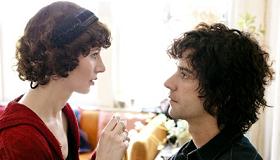 Performance artist and indie filmmaker Miranda July's second feature is simultaneously her darkest and her most twee. Allegedly inspired by a serious break-up, July has mounted a surrealist fable about the delicate balance between relationships and the inner monologue inside each lover, with its incessant demands and individual needs. Unevenness is an aesthetic here —not so much a flaw as a conscious choice. Though more ruminative and far less fun, The Future lives up to the expectations set by July's whimsical previous film You, Me and Everyone We Know. Given the right handling on the festival circuit and in urban arthouses, The Future could measurably expand July's small but ardent fanbase in a minor but meaningful way.

July plays Sophie, a 35 year old bohemian living with her boyfriend Jason
(Hamish Linklater) in a tiny apartment. When the two find an injured cat, turn it in to the pound and then adopt it once it's healed, this simple act of commitment precipitates a crisis in their rootless lives. For Jason, this takes the form of a radical openness to the world. If anyone approaches him, he deals with it. If anyone asks him a question, he tries to answer affirmatively. Soon, Jason is part of a "save the earth" campaign, and a dismal failure encouraging people to plant trees.

Sophie's journey is darker and more emotionally complex. She takes a lover —a man who lives in the vast and capacious suburbs of Tarzana, a world as far away from the drifting bohemian netherworld Sophie has spent her life in as any place can be. What she's really looking for is a space to take stock of her choices, a vacation retreat in the materialist values she's always rejected, to see if meaning resides there. But her actions are far from harmless, and they come with a devastating cost.

July again shows a flair for human eccentricity and magical realism. Paw Paw, the cat, narrates the film from a cage in the pound, waiting to be rescued and fantasizing about the wonderful world Sophie and Jason must live in. It's a beautiful conceit, simultaneously amusing, ironic and profound. Paw Paw emerges as The Future's reigning metaphor —an organic entity, just like a relationship, simultaneously dreaming of future happiness and possibly waiting to die.

July has a flair for deadpan comedy and a real way with a script. The Future may be the most quotable movie to premiere at Sundance 2011. When July's lover tells her she must either inform Jason of their relationship or else lie to him, she responds with the pretzel logic of many a cheater, saying, "Jason and I are very close. I could never do either of those things."

July and Linklater are a perfect aging hipster couple, simultaneously right for each other and taking too much for granted, their earlier compatibility still visible inside their present passionless complacency. Linklater is particularly fine, giving a moving monologue about the end of the world and "how much I loved this place" when he cracks under the strain of his failing relationship and bares his soul to another stranger who won't buy a tree.

In its quiet and even prankish way, The Future is an ambitious and extremely personal work. July, who was named one of Filmmaker Magazine's 25 indie directors to watch back in 2004, is still in some ways an emerging talent. But the fearless creative energy she displays and her unflinching honesty about not just the outer but also the inner world of romantic despair, make The Future a unique and rewarding experience.