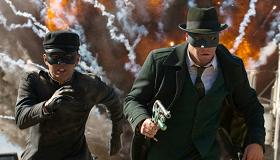 Three quarters of a century after it debuted as a radio serial (and later a short-lived 1960's TV series) The Green Hornet is roaring onto the big screen with Seth Rogen turning the tale of the masked vigilante into a buddy comedy with villains that aren't in on the joke. Nevertheless, there is plenty of action and (converted) 3D hijinks to make this a fanboy hit over the Martin Luther King holiday weekend. Long-term prospects would seem iffier stateside but thanks to Rogen and Asian pop star Jay Chou's onscreen chemistry this one should definitely find success internationally.

Re-conceived by Rogen and his Superbad writing partner Evan Goldberg, Britt Reid aka Green Hornet (Rogen) is a loud-mouthed, womanizing trust-fund baby whose superhero fantasies get turned to reality when his Newspaper kingpin father (Tom Wilkinson) suddenly succumbs to a bee sting. Inheriting the paper and using it to boost his own ego and agenda, Brit teams up with dad's auto mechanic Kato (Chou) to cruise L.A. like wannabe criminals, but when the city's uber-villain, Benjamin Chudnofsky (Christoph Waltz) enlists all the local gangs in a plot to gain ultimate domination of the city, Britt and Kato have to hang their bad-boy badges. Complications with a crooked D.A. (David Harbour) suddenly give the daring duo a chance to turn their nefarious exploits into genuine heroic acts, but once they start they find they may be in over their heads.

As The Green Hornet played second-fiddle to Batman when both aired on ABC in the '60s, this souped-up film version undeniably plays a supporting role to the Caped Crusader again, but clearly director Michel Gondry's blueprint (or Green print?) does not carry the ambition of Christopher Nolan's Batman reinventions. Where those films are dark and full of intriguing ideas, this one is bright and loaded with pop culture references and moments to showcase Rogen as superhero-as-buffoon. Surprisingly it often works, and we can credit the irreverent tone set right in the opening sequence, when the colorless but brutally ruthless Chudnofsky gets style tips on villainy from a more polished rival (a hilarious cameo from an uncredited James Franco). Most of the second half gets bogged down in loud car chases, gunplay and over-the-top confrontations.

Rogen isn't the obvious choice for a comic book icon but he forces his personality onto this material with an ingratiating ease. Chou is a good deadpan foil and survives comparisons to Bruce Lee, who played the role in the TV show. A Taiwanese pop star, Chou also contributed some of the songs on soundtrack. Cameron Diaz as a spirited newspaper reporter is around for a few scenes but all seem forced and overly frenetic. Harbour ably plays his one-dimensional badass D.A. with steely reserve but Waltz, who was so great as the definition of cunning evil in Inglourious Basterds, never really makes Chudnofsky register with any impact beyond the amusing opening scene.

The 3D conversion is well-done but only really serves as a gimmicky boost for box office.