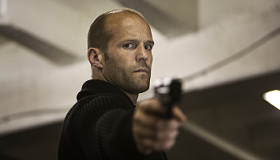 The 1972 thriller The Mechanic was not particularly good, so it's hard to explain all the effort expended to create a new version that's also not particularly good. The most interesting thing about the Charles Bronson original was a layer of existentialism so subtle it was probably unintentional. The remake, not surprisingly, has no interest in existentialism. For that, you're better off seeing the old version's real spiritual descendent, Anton Corbijn's overlooked The American. This slicker, louder, B movie Mechanic is just another opportunity to watch Jason Statham do what Jason Statham always does, which is starting to get tiresome. He plays an elite hitman whose new apprentice is the son of his latest victim. Both teacher and student are potentially interesting characters who cannot be properly explored because their job is to reveal nothing. So you're left with a character study without characters, which means lots of flying bullets and exploding cars. Statham fans are in for a treat because there's a lot of scowling. The rest of the audience will be Saturday night stragglers in the mood for generic action.

The London-born Statham looks out of place in the New Orleans setting. He plays Arthur Bishop, a contract killer who snaps into action when his boss, Dean, (Tony Goldwyn) requires the quick and quiet murder of various unsavory sorts. Bishop is thoroughly schooled in discretely killing people so "nobody ever knows you were there." He spends hours pouring over photos and dossiers while planning his next hit, which may explain why he never has time to shave. Bishop is another of those killers with an only-in-the-movies air of sophistication. We know this because he uses a record player to enjoy classical music while sitting in an Eames chair, none of which Statham looks like he'd actually do. If you really want to give dimension to your assassin, hand him a mentor; it shows he's not so tough he can't admire an elder. That elder is Harry (Donald Sutherland), wheelchair bound and embezzling from Dean's organization. Dean finds out and assigns Arthur to kill his beloved friend. Initially conflicted, Arthur concocts a clever plan to force Harry out of his secure office for dramatic dispatching. Wait a while and that sense of cleverness will also be dispatched.

The Mechanic was directed by Simon West (Con Air), an action specialist whose career never really took off. Here, he begins with a smart choice. Arthur's first hit is meant to establish his expertise and the sequence is cut more leisurely than expected. It's not as gutsy as the 15-minute dialogue-free opening of the original, but it creates an expectation of something less reliant on push-button chase sequences. Gradually that promise fades into the grainy, golden-hued distance until so many municipal vehicles are theatrically destroyed that you start questioning Arthur's job effectiveness. If your specialty is hush-hush murder, should you really use an enormous truck to lift an enormous car down the street and then empty your enormous clip into your target in broad daylight? By this point, though, Arthur is motivated by extreme anger. Also by this point, Arthur has a partner. Steve is Harry's estranged son. He's played by Ben Foster (a revelation in 3:10 to Yuma), the only chance this movie has of elevating itself above its lowly station. Steve is determined to avenge his father's death, so Arthur makes him his protégé, teaching him how to stalk silently, kill quickly and use a record player to enjoy classical music while sitting in an Eames chair.

As someone motivated by vengeance, at least there's a relatable emotional component behind Steve's actions. Foster gives Steve a troubled punk energy that sometimes gets channeled in intriguingly inappropriate ways. For his first solo kill, he rejects a clean and bloodless assassination for a raging fistfight, just to prove he can. Soon he settles in and the pair travel to Chicago to murder a corpulent cult leader, resulting in a decent if disappointing mélange of blurring fists, too-tight close-ups and lighting cuts. Not to belabor the point, but the original had very little blurring fists, too-tight close-ups or lighting cuts. Part of that is because the original wasn't very well made. It's also because it wasn't afraid to flash some thematic muscle with the idea of an inhuman killing machine paying a price for showing a sliver of humanity. The new film could have benefited from even a moment of genuine reflection. Being a mechanic seems like a thinking man's occupation. The Mechanic, though, barely has a thought in its head.