close
Needs the devil in the details. 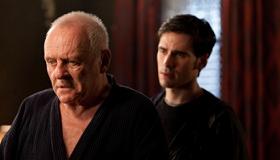 It's ironic that characters in The Rite, Mikael Håfström's exorcism horror, insist on the importance of prayers as "more than just words," when the film is organized with the accuracy and feeling of a classified ad: doubting junior priest seeks master exorcist to save one soul, preferably young/female. What typically anchors films of this subgenre in some anthropological reality is an attention to the ritual tools and practices; strangely this facet is absent here, replaced by a swaggering pragmatist of a priest (Anthony Hopkins) and an underdeveloped theme of spiritual doubt. In its third act The Rite loses what little steam it generated in the middle, where its sanctified song and dance hit a fever pitch as the afflicted "patient" vomited spikes upon hearing the name of the Lord. Even if Hopkins completists support it, word of mouth will seriously douse this ceremonial flame.

The Rite misleads us early on with extreme close-ups of menacing utensils. The expert hands belong to Michael Kovak (TV's Colin O'Donoghue), a mortician; his equipment is for embalming not demon-purging. To escape the family business, Michael enters seminary. After the requisite four years he tries to walk away from the ill-fitting robes and collars but he is immediately manipulated into staying put—upon defection he would have to assume the cost of his education. So our wouldn't-be priest is shuttled to the Vatican to bone up on exorcism due to an uptick in demand for practitioners. A poster-child for skepticism, Michael goes to Rome and meets the unorthodox Father Lucas (Hopkins). Lucas isn't menacing, he's self-assured and matter-of-fact, a perfect contrast to Michael's self-satisfied posture of doubt. As soon as they've shaken hands, Lucas whisks Michael upstairs where they perform a routine exorcism on a repeat customer (the possessed may require months or years of treatment). The notion of workaday exorcism certainly deflates the usual gravity and horror, but when a cell phone jingle interrupts the ritual, this undermining of genre conventions has gone too far.

Catholic stories often involve melodramatic polarities: doubt resists faith, demons conquer innocents, precious ritual counteracts messy possession. The horror genre loves the sharp corners of these dichotomies but each film needs a twist to fend off predictability. This film's twist? Father Lucas is too practical for his job; he eschews pomp and circumstance and has a sex appeal that makes you skeptical of his celibacy. Because the seething burlesque of demonic possession isn't counterbalanced with the rigorous protocols of a traditional exorcism ritual, it's only natural these confrontations sprawl in unkempt and arbitrary directions, compromising the clarity of the spiritual conflicts. The Rite might have been more affecting if the performances gave just a hint that its histrionics were more than that.