close
Aptly titled dramedy is a feather in Sundance’s cap 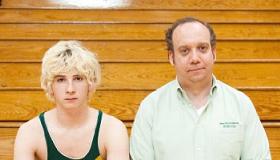 Actor-turned-auteur Tom McCarthy returns to the Sundance Film Festival for the third time with his third feature. Like The Station Agent and The Visitor, Win Win is a film with a big heart; it's an eccentric dramedy and a crowd pleaser. Paul Giamatti stars as an otherwise honest lawyer who gives into temptation as a way out of his financial troubles, only to see the situation spin out of his control when his client's 16 year old grandson arrives on the scene. Hilarious and moving, the movie ought to give distributor Fox Searchlight a healthy boost on the bottom line when it hits the indie circuit in March.

The most socialized of McCarthy's heroes, Mike Flaherty is a lawyer, a family man and a high school wrestling coach. Business at his practice is slow and with bills piling up, he seeks a solution to his financial problems by becoming legal guardian to an elderly, dementia-afflicted client named Leo (Burt Young). For a nice guy Mike is odious, manipulating the helpless old man. When Kyle (Alex Shaffer), the grandkid Leo never knew, shows up, Mike and his wife Jackie (Amy Ryan) have little choice but to let him stay with them and their two young daughters while they wait to hear from Kyle's mom Cindy (Melanie Lynskey). Mike is eager to see the kid back to Ohio—until he discovers that the kid is a gifted wrestler.

It's to Giamatti's credit as an actor (and McCarthy's as a writer) that we have an unerring feel for the soft center in Mike; even as he's behaving badly we sympathize with him. That's partially because his actions toward Leo are not so much mean-spirited as thoughtless, and all he does demonstrates the best intentions toward his family. As much as he's using Kyle to better his wrestling team's chances, the paternal attitude he adopts toward the boy is completely genuine. The Flahertys, both Mike and Jackie, are at the center of a kind of solar system, pulling in those that need their essential warmth. Around them are a group that includes Kyle, Mike's CPA office mate and assistant coach Vigman (Jeffrey Tambor) and Terry (Bobby Cannavale), an old friend who's hurting from a recent divorce.

The entire cast is great, with the ebullient Cannavale a standout, but the real find here is Shaffer in his first movie. He is simply terrific as a damaged kid who doesn't trust easily, but who responds to the lifeline the Flahertys provide. It is a complex role, demanding a range of emotions that run from sweetness to hurt to sudden and dangerous anger, and Shaffer rises to the challenge.

With witty and believable dialogue, a situation that's both funny and sad, and a group of actors that sink into their roles, this is McCarthy's best film yet. Once again, he proves that he is a writer with a grasp of character and story, a warm-hearted, generous chronicler of human connection. With his latest, he certainly got the title right. It really is a Win Win.