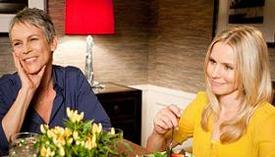 What's the deal with 2010 movies and Hall & Oates' 1981 chart topper "Kiss on My List?" Earlier this year the song appeared in She's Out of My League as part of the repertoire of a Hall & Oates cover band. In You Again, the band itself appears to warble their 30 year old hit over the end credits. It's a highlight in this tepid comedy about a young woman and her mother, both of whom are forced to revisit painful high school memories when they are reunited with their teenage nemeses. Not exactly a wo-mance, this is more of a woe-mance. A talented cast is game, but the lazy script utterly fails them. With few female-centric comedies in theaters right now, the movie might still score at the box office initially, but poor word of mouth and a quick fade seem all but certain.

High school was hellish for Marni (Kristen Bell). The self-described "poster child for the geek squad" suffered mainly because of to nonstop bullying by cheerleader J.J. (Odette Yustman). Now a successful publicist, all of that seems to be behind her until she returns home for older brother Will's (Jimmy Wolk) wedding and discovers that his fiancée, Joanna, is her old enemy. Her mother, Gail (Jamie Lee Curtis), gets as big a shock when Joanna's only living relative arrives and Aunt Ramona (Sigourney Weaver), a wealthy hotelier, turns out to be her former best friend--a relationship that fractured when they were teenagers. To say that the two reunions are rocky is an understatement.

Screenwriter Moe Jelline and director Andy Fickman presents the audience with a lot to swallow, starting with the idea that someone who looks like Kristen Bell, even with acne, glasses and braces, would really be that much of a social outcast. Then it tries to sell the notion that Joanna, the meanest of the mean girls, has not just reformed but morphed into a secular Mother Teresa devoted to good works. It would also have us believe that Will, only two years older than the girls, had no idea about the trouble between them in high school, despite the facts that he was supposed to be close to his sister and was a jock, while Joanna was a cheerleader and Marni was the school mascot.

None of that would matter if the movie was actually funny, but far too much of it falls flat, including shopworn turns by Betty White playing Marni's Grandma Bunny (as that hoariest of clichés, the eccentric oldster), and Kristen Chenoweth as a flamboyant celebrity wedding planner. You Again is not a complete disaster. Dwayne Johnson sparkles in an unbilled cameo as an air marshal who encounters Marni. There is also a very slight romantic subplot involving Marni and a groomsman/ex-classmate named Charlie (Sean Wing), but it's barely developed. Bell and Wing are sweet together and the movie might have been better served by enlarging that relationship.

Perhaps in having Marni as an adult behave nearly as badly as Joanna did as a teenager, Jelline hoped to make a point about how those adolescent encounters can warp even the nicest people, but if so, his message was lost amidst the indifferent humor. At 105 minutes, the movie is also way too long for such a thin story. This is supposed to be a comedy, but too often it feels like a punishment.