close
No funk in this junk: Big Momma lays an egg 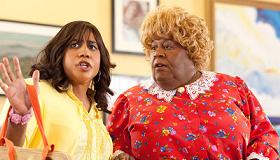 Five years before Tyler Perry brought his plus-size character Madea to the big screen, Martin Lawrence donned drag as a crime-fighter in sync with his ample feminine side. 2000's Big Momma's House and its 2006 sequel continued the tradition—one that cuts across cultures, eras and media, and to which Eddie Murphy brought flashes of comic genius. Sadly (or not), this current outing could bring cross-dressing entertainments to an end, stapling shut the sub-genre's stomach, as it were. Big Momma has laid a gigantic egg. Starved of humor and energy, the interminable Big Mommas: Life Father, Like Son could force Lawrence and co-star Brandon T. Jackson undercover for real. Hope they didn't defer their compensation to what will likely be a scrawny back-end.

A certain amount of humiliation and stereotype milking comes with the territory, but this dull, flat comedy, directed by John Whitesell (who helmed the sequel) from a script by Matthew Fogel, exploits without ever being funny or even rollicking. In Atlanta, FBI agent Malcolm Turner (Lawrence) and his stepson Trent (Jackson) infiltrate a girl's school for the performing arts after a snitch hides a flash drive in the library. The digital device contains the goods on a Russian gangster, whom Trent witnessed committing murder.

Posing as Big Momma's grandniece Charmaine, Trent gets the chance to ogle chicks and absorb lessons about the hip-hop career he relentlessly pursues, disregarding (temporarily) parental entreaties for him to enroll into Duke University. The young rapper, who goes by the stage name The Prodigy, promptly meets his soul mate Haley (Jessica Lucas), while Big Momma is busy fending off the advances of a janitor-in-heat named Kurtis Kool (Faizon Love).

There are numerous contenders, but the lamest scene is probably a spontaneous jam session in the school cafeteria. The girls force newbie Charmaine to throw down some rhymes and Big Momma, who has landed a job as a House Mother, shakes her stuff and ends up on her ample caboose having crushed a table. Chunky is an apt description for this fourth-rate High School Musical interlude, and for the movie as a whole.

Later, when an art teacher convinces Big Momma to shed her clothes and serve as a live model for drawing students, Charmaine interrupts the fiasco by pulling the fire alarm. (If it didn't result in possible jail time, I'd suggest yanking the fire alarm yourself; if you're stuck inside a movie theater playing Big Mommas, it's one way to end the pain.) After what seems like hours, the climax finally arrives: the Russian thugs interrupt a talent recital as Haley and Trent/Charmaine perform an anodyne, wannabe chart-smashing duet.

Whatever their shortcomings, at least the first two Big Mommas had broad appeal. The third time around there's confusion about who the film is aimed at. Most every demographic—male and female, young and old, black and white—will be bored to death by Big Mommas: Like Father, Like Son. Just resist the temptation to scream "Fire!" or set off the alarm inside the Cineplex.